This is the second beer from Laughing Dog  Simply Beer has reviewed.  Previously we had looked at the 127 IBU monster, Alpha Dog, now we take a look at the black dog in the pack.  Dogzilla is Laughing Dog’s Black IPA.  This style of beer has been attempted by several breweries, including Southern Tier.  It is basically an IPA with Dark malt, or is it a Porter with lots of aroma Hops?  I don’t know, but I think this one is more of the latter. 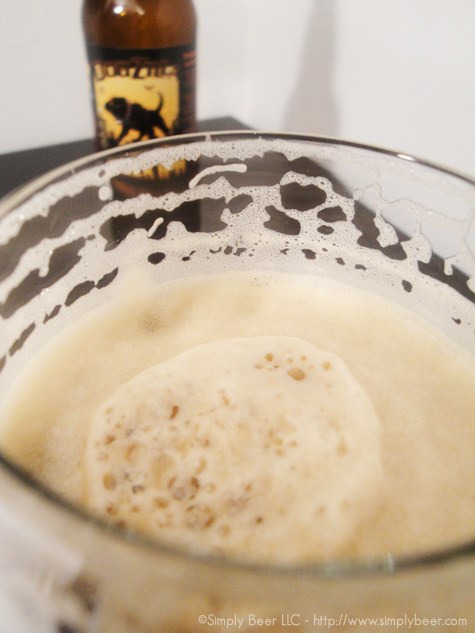 This beer has a serious case of lacing, that’s a good thing!  It poured with a monstrous head, that slowly dissipated over a couple minutes leaving a ton of foam the side of my glass.  The beer itself is a dark, porter like with ruby hues when held to the light. 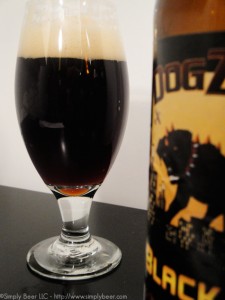 Really like the aroma on this beer, it was very hoppy as expected, but had a bits of chocolate, licorice, plum, and raisin on the nose.  Every so often a caught a faint wisp of coffee.

The beer starts off malty, with notes of chocolate and caramel that slowly merge into that typical IPA citrus / grapefruit. Then finishes very bitter with some of the black patent malt burnt flavor. This burnt flavor is more of like what you would find in a porter.  The bitterness in this beer, continues to build after each sip, I needed to take time in between sips to moderate the bitterness.

Enjoyed the aroma with this beer and the flavors were pretty good, but the bitterness really became to much for me.  If you’ve had this did you have an issue with the burnt/bitterness?