I usually don’t post about events I go to because they all tend to be the same, however last nights event at Brooklyn Brewery was a little bit different, Backyard Hops In Support Of BK Farmyards. I love to be able to help out local organizations, especially ones which share a common passion. I’ve been growing hops in my back yard for years and this event put on by the Good Beer Seal, helped showcase some local hop growers and expose a lot of folks at the event that Washington and Oregon are not the only hop growers in the US.

The highlight of the night, besides the great reception my Cardamom Wit and Rye Barrel Stout received, 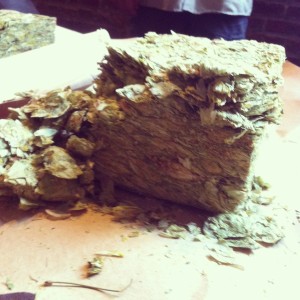 was tasting the cask of cream ale that Peekskill Brewery brought that was dryhopped with Segal Hop Ranch’s experimental 7272 hop.  While Segal Ranch is out of Washington, they used to be the largest hop farm in NY State before Downy Mildew wiped out most Hop Crops in NY.  John Segal also brought some samples (bricks) of Nugget, Centennial, Northern Brewer, Cascade, and the experimental 7272.  At the end of the night, I was able to take home several ounces of whole cone Northern Brewer and 7272; wicked cool parting gift!

While the hops and beer were really cool, BK Farmyard was the real beneficiary of the evening with the tickets and silent auctions helping to raise money for continued urban growing efforts.  Be sure to check them out, give if you can.  The world isn’t getting any smaller;  People and efforts like this are a great way to get fresh, low carbon footprint food!