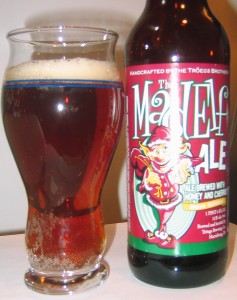 The Tröegs Brewing Co from Harrisburg PA has been commercial making beer for the last decade. I’ve had a couple of their widely distributed beers, which have been pretty good. The Mad Elf Ale is a very high gravity Belgium Strong Ale, 11% abv. One of the most striking things about this beer is the intense ruby color. The Head on the beer had completely dissipated within a minute. There was a very subtle sweet aroma. With the high alcohol content I was expecting to taste and smell that alcohol, but for the most part you could not tell the beer had 11% alcohol, it was extremely well balanced. The honey and Cherries in the beer really shown through. While I thought this beer tasted great, it really lacked in other departments.