Oysters in Beer, say what?  I think that is just what Flying Fish wants you to say when they came out with their third Exit Series Beer, Exit 1.  I was really looking forward to this beer after the first two successes.  What does success get you?  Well, your consumers are will to go a bit further in what they willing try from your brewery, in this case the Bayshore Oyster Stout.  With a couple minutes of research  you will find that this is not a new style of beer.  Oyster stouts have been made for the better part of the last 100 years and up until the 50’s, South Jersey had been supplying most of the America’s oysters for the last couple hundred years. 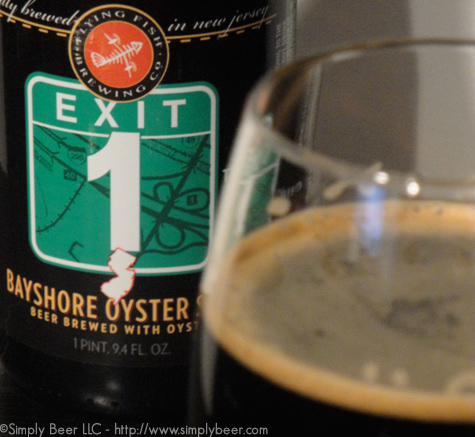 Here is how Flying Fish describes this beer:

The southwest bayshore has been supplying oysters to Americans since colonial times.  Until the 1950s, hundreds of millions of oysters were harvested annually. Now, thanks to efforts by many organizations, the oyster is coming back.

Oysters and stout had long been associated in the UK, but the tradition was gradually lost.  Exit 1, an “export style” stout brewed with oysters, celebrates this tasty combination.  The creamy flavor of English chocolate and roasted malts harmonizes with minerals from the oyster shells.  Irish ale yeast adds a bit of fruitiness and a dry crispness.  This rich stout is perfect for cool weather–and especially delicious when paired with a few Jersey oysters on the half shell.

Black, ink black beer with a very dark  cappuccino colored head.  While there was an initial thick head of foam on the beer it quickly disappeared to a thin coating on top.

A very strong roasted aroma greets your nose with a bit of dark chocolate and a pretty significant brine; which almost has a smokey rauchbier quality to it.  This is my first Oyster beer, so I’m not well versed on what the aromas should be, while interesting is not that enticing.  I’m not exactly saying to myself, “I can’t wait to try this beer” based on the aroma, unlike the last two from the Exit series.

Strong roasted malty with a silky chocolate mouth feel.  The beer had some nice finishing bitterness which balanced nicely with the silky chocolate.  In the middle of the sip on the top of your mouth there is a brine and smokey quality to the beer.  Through the coarse of a 750ml bottle, this flavor became very intense.  I didn’t find this beer to get better the more I drank, I would have been elated with just an 8 oz glass.

Of the three exit series beers, Exit 4, Exit 11, and Exit 1, Exit 4 was my favorite.  This was my least.  I enjoyed the smoothness of the beer, but wasn’t a fan of how the chocolate, brine/smokiness, and bitterness mixed together.  I’m pretty sure I’ll be the only one in Jersey to publicly say that, sorry Flying Fish, still love ya!

I’m curious to hear what others think.