I love the name of this beer, Dragon’s Milk! It is brewed by New Holland Brewery out of Holland Michigan. Having had several New Holland beers in the past, I was looking forward to trying another one of their beers and my first from their High Gravity series. There are 8 beers in the High Gravity Series all with an ABV of at least 7% and most over 10%. A high Gravity beer initially has a lot of sugar in the pre fermented beer which results in a large difference in density compared to water and generally results in a higher alcohol content, which in beer geek speak is the beers’ gravity. Your beer lesson of the day, now onto the beer! 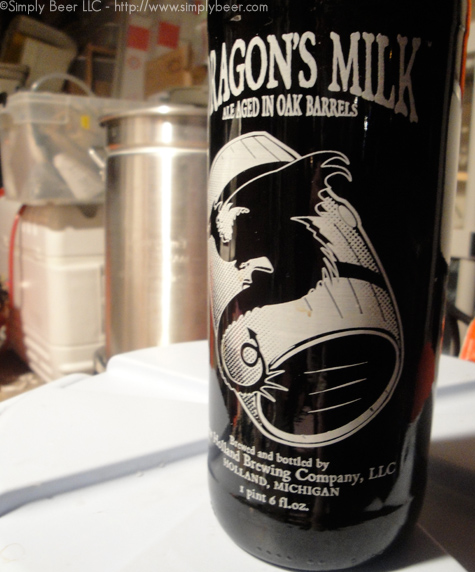 Dragon’s Milk is an Ale. What kind of ale? You got me, New Holland doesn’t actually qualify this beer as any particular type, so neither will we. Here is how New Holland quantifies the Dragon’s Milk:

The beer you hold in your hand, Dragon’s Milk Ale, is a crown jewel of New Holland Brewing Company. It is the unrivaled result of painstaking processes – both creative and scientific.

Well, it looks like a stout or porter, a very dark beer with ruby highlights.  Think amber head, that stucks around for a long time,  resulting in some serious lacing.  The foam from the lacing was almost pasted the side of my glass.

Ahhh, this smells good! Strong aroma of Oak, Vanilla, Coconut, and also some chocolate under it all.  Really an amazing complex aroma coming from this beer.

Saaaa-mooooth!  For a 9%abv beer this is amazingly smooth and lush.  This was like chocolate milk spiked with bourbon.  Strong oak and vanilla flavors add to the intensity of the chocolate and bourbon.  the coconut didn’t really come through in the flavor, I’m not sure why, but I was relieved about that.  This is a delicious complex beer.

Loved this beer.  I thought it was well crafted, well balanced with out being namby-pamby about the bourbon or the oak, but still keeping them in check.  I highly recommend going out and trying this beer.