There are some IPA’s out there that for what ever reason have a lot of cache associated with them, Pliney the Elder , Hopslam, and Nugget Nectar are at the top of most people’s list another one at the top of many lists is Ballast Points Sculpin.  I’ve not seen it in NJ for whatever reason, even though many Ballast Point beers are.   So, when I saw it at the Whole Food Bowery (NYC) I bought a bottle. 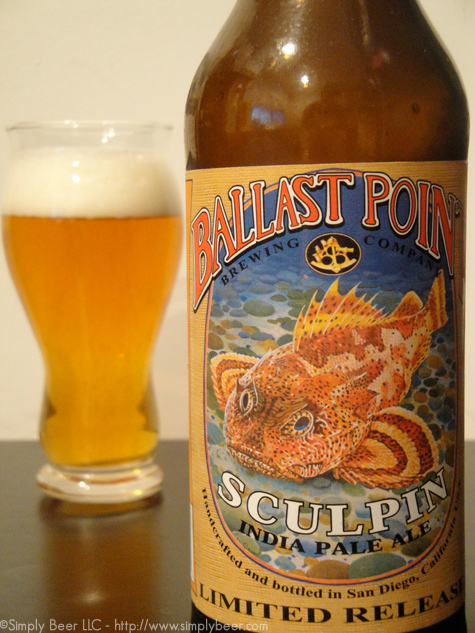 Here is how Ballast Point describes their beer:

The Sculpin IPA is a testament to our humble beginnings as Home Brew Mart. Founded in 1992, the Mart continues to be a catalyst for the San Diego brewing scene, setting the trend for handcrafted ales. Inspired by our customers, employees and brewers, the Sculpin IPA is bright with aromas of apricot, peach, mango and lemon. Its lighter body also brings out the crispness of the hops. This delicious Ballast Point Ale took a Bronze Medal at the 2007 Great American Beer Festival in the Pro Am category. The Sculpin fish has poisonous spikes on its fins that can give a strong sting. Ironically, the meat from a Sculpin is considered some of the most tasty. Something that has a sting but tastes great, sounds like a Ballast Point India Pale Ale.

This beer is off to a good start, nice clear auburn/gold color and lots of carbonation.  There is a torrent of bubbles rising from the bottem helping promote the head.  There is a big thick, dense, creamy head with a ton of lacing.

Now this is what I’m always talking about for an American IPA, you have to have a big nose, in my opinion. This beer doesn’t quit in that department. The aroma is loaded with tons of apricot and mango with some underlying resinous bubblegum notes. 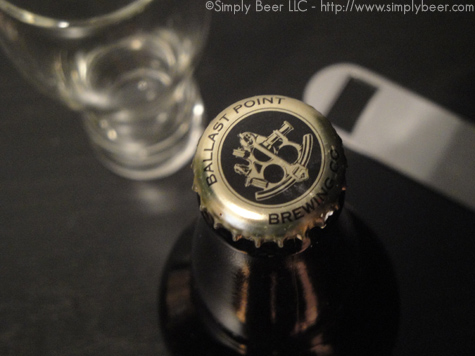 We now have anticipation to taste this beer, great aroma and appearance, I hope the flavor lives up.

My initial take is the Aroma is the best part of the beer, I prefer my IPA’s to have a bit more balance between the malt and bitterness.  This beer is a bit thinner then I expected, with a mild malty, more grainy taste which transitioned quickly into a nice sharp piney, grapefruit, and slightly peppery bitterness that lasts throughout the rest of the beer.  The bitterness will last for several minutes after each sip.

Just refilled my glass with the 2nd half of the bomber, It has a much better flavor balance, a bit warmer and some nice tropical fruit notes right before that long bitterness.

I enjoyed this beer very much, but I don’t think it is a “seek and destroy” to acquire type of beer.  Very typical of a west coast IPA, big aroma, with tons of bitterness.  The beer does get easier to drink and more flavorful with bit of warming.  Like I said above, my preference is for more malt balance in my IPA’s.

Have you had this beer?  What did you think of it?