Having known a few Celiacs, the one thing they ask me: “Are there any good beers out there for us?”  There are a lot of people allergic to Wheat and Barley making beer unpleasant to a life threatening drink.  Lately I have seen a few Gluten free beers come to market, most barely able to live up to the flavor profile of a generic macro adjunct lager.  When I saw Green’s Gluten Free Triple Blonde Ale, I though this one may have some possibility, a 8.5% abv bottle refermented Triple Blonde Ale. 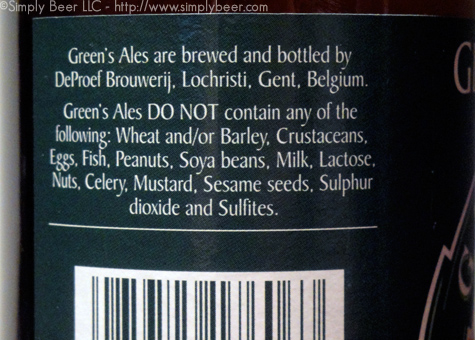 Here is how Green’s describes the beer:

Surprisingly, a very nice head on this beer.  I suppose my standards are pretty low for this style of beer, but with a good head and a very clear golden color made for a very appealing looking beer.  Also it had a good deal of carbonation as you might expect from a refermented beer.

Green’s Gluten Free Tripel Blond has a light yeasty aroma and a bit of lettuce to the nose.  Otherwise not much happening here. 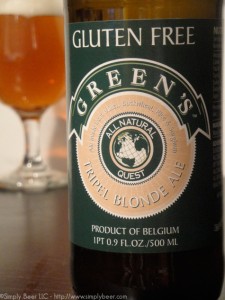 The Kicker… Very carbonated with a light mouthfeel, it has a bit of a zing with a hint of citrus tartness and apple.  Finishes off with a bit bitterness and some strawberry like residual tartness.

Actually not a bad beer, which shouldn’t come as a surprise since it is brewed by De Proefbrouwerij. Had some tartness to the beer which I enjoyed.  If this style of beer was all I could drink, this would be a good option.  The also have several other Gluten Free Beers, an Amber, Dubbel, along with other harder to find styles.