For the second beer review in a row, another beer in a can.  This time it’s from Oskar Blues Brewery’s Old Chub Scottish Style Ale.  I love this style of beer with its big malty flavors and low hop profile and after seeing a review of this beer on a fellow beer bloggers site (Thank heaven for Beer), I really wanted to give this beer a try. 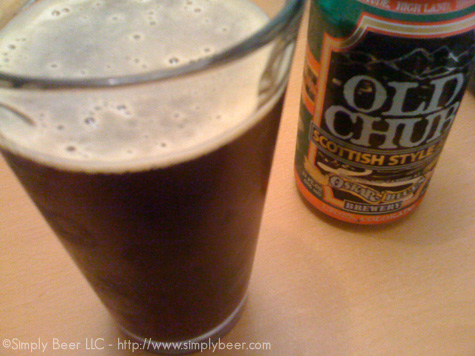 First off there was no pop when I opened the can, it was almost flat.  I gave the beer a very hard pour, managed a 1/4 inch head.  This beer was very dark, with ruby highlight.  Thankfully a bit of a swirl brings the head back.

Big malty aroma.  Lots of toastiness (if that’s a word?), some molasses, and bit  chocolaty and nutty.  Basically this is what a wee heavy should smell like!

This tastes like a big beer, bigger then the 8%.  The alcohol is very strong on this beer, which works really well with the smokiness and maltiness of the brew.  While these are dominate flavors in the beer, there were chocolate and spicy notes that also made their presence know.  As with a scotch ale, there was almost no hop presence aside from the bit of spiciness.

A very strong wee heavy.  Great strong flavors.  With a beer this strong, you need strong flavors and this beer has both!  Loved the flavors, but not sure I could drink another.