In a market over-saturated with IPA’s, this one stands out and people are buying it because it is in a can.  Has a good uniqueness factor. How many craft beers come in a can, only a handful and this is the only IPA, in a can, I’ve seen in New Jersey. 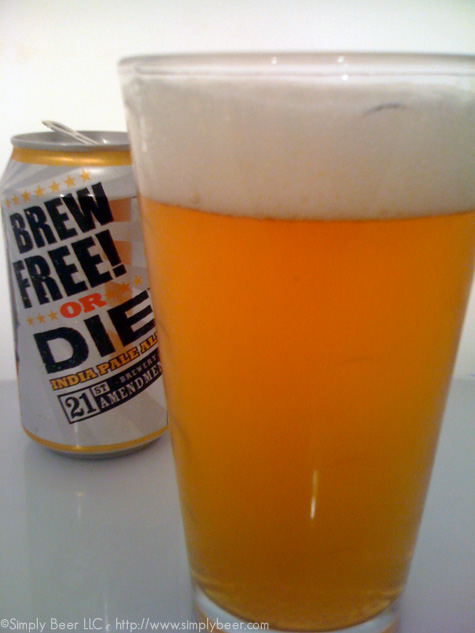 Out of the can, the beer was a bit hazy, but a nice golden straw color.  It initially poured with a pretty big head unleashing some good aroma.  The head then subsided slowly over the next couple of minutes.  Also appears to have some good carbonation with lots of bubbles rising from the bottom of the glass.

This beer smelled really nice, not over whelming, some really nice tropical fruit with a touch of pine.

After two sips I can’t say that I’m a huge fan of the flavor.  Unlike the Hell or High Watermelon, this beer has a strong metallic taste which really carries through the whole mouth and come particularly apparent right before the finishing bitterness.  I did like the the finishing bitterness, as this beer starts out it fairly fruity and malty.  The fruitiness transitions into a whole mouth zing as the carbonation really hits your tongue.  From there you get a good strong grapefruit flavor, but then that metallic taste comes in right before the rounding bitterness.

I liked the aroma, which is a really nice surprise coming out of a can.  I have this image in my head of drinking Heineken and PBR from a can in school, this beer contradicts what I have hard-wired in my brain.  Unfortunately that metallic taste really ruined my experience.  Without that metallic flavor, this was a pretty good IPA.

Simply Beer Rating: 84, I will probably try this again to see if the metallic flavor is in another can.

What did you think of this beer?