What happens when Captain Lawrence brings in one of their biggest supporters who happens to also be a high end food market?  You get a Abbey Ale made with Imported Italian Chestnut Honey and Jam.  I’m not even sure what “Italian Chestnut honey and jam” is, but it peaked my interest.  As a big supporter (or at least I try) of local breweries, I drove up to Captain Lawrence on Birra DeCicco’s release day to snag a couple bottles of this intriguing brew with Lee from Hoptopia. 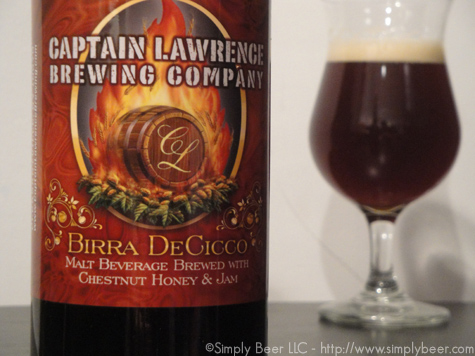 Here is how Captain Lawrence describes their beer:

Fermented with our house Belgian-style Ale strain to impart the classic fruity and spicy flavors of a traditional abbey ale. Infused with imported Italian chestnut honey and jam to create rich and smoky undertones. Re-fermented in the bottle using even more Italian chestnut honey to give the beer its lively carbonation. 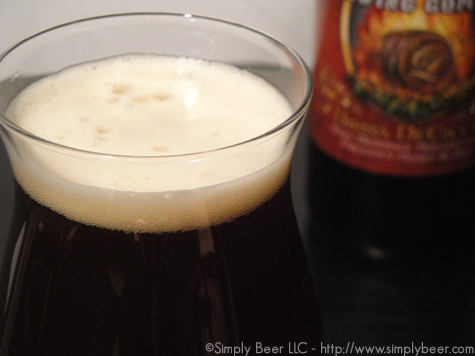 The beer pours nice out of the bottle, I’m not sure why but I’m immediately thinking flanders red.  It has this appealing hazy reddish brown hue with this creamy head of foam.  When held up to the light, there is a very appealing bright red/ruby tone around the edge of the glass.

While it had the same Rodenbach color, it smelled nothing of the sort nor should it.  The Birra DeCicco had a very big yeasty nose, typical of a Belgian Abbey Ales.  It also had aromas of black cherries, nuts, wood/earth, pinch of smoke, and a bit of alcohol.  Pretty complex and interesting aroma. 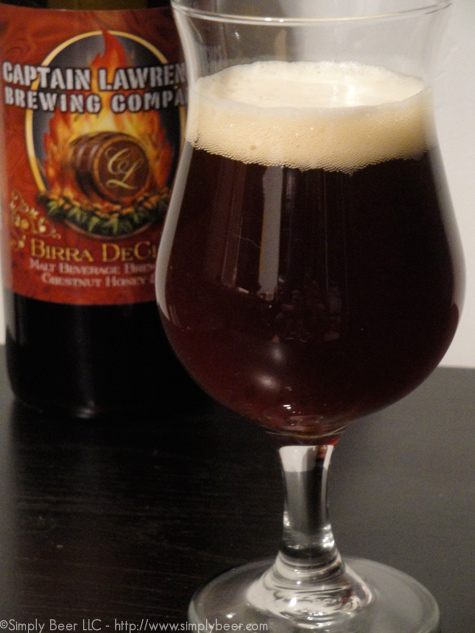 First off, My wife likes this beer.  That puts this beer into rare company.  We have not found many beers that she likes, Dogfish 120 was the last one she liked…

Now for my 2 cents, Great mouthfeel, lots of carbonation makes this beer zing though your mouth.  The first impressions in the mouth are of sweet nutty chestnuts and bit of a wine like quality, like a zinfandel.  All through the beer, the yeasty quality is ever present, like a wave, up and down in intensity. In the middle mouth there is a pretty significant sweet citrus flavor, but not a hop citrus, but more of a fruit citrus.  Very interesting.  As that citrus subsides, the yeast comes back and you have this yeasty tang left lingering in the aftertaste.

Calories: Unknown, since the ABV is not known

Lee and I had samples of this beer at the brewery and a sample doesn’t do this beer justice.  You need to experience this beer as it warms, the flavors are so complex and evolving as you drink this beer.  I don’t think the chestnuts played a huge role in this beer, but did give it some nuttiness which added nicely to the complexity of the beer. I’ve noticed that a lot of Italian craft breweries are using Chestnuts in their beer, I think it is a great additional flavor that doesn’t overwhelm a beer.  As for the Jam, I dunno.  Captain Lawrence if you read this, what is the “jam” in this beer?

One final note, if you can try this beer and pair it with some food to bring out the chestnuts!  This beer is a wonderful food companion.