This beer will be a first for me; the first time I’ve reviewed the same beer twice. My first Mikkeller Beer Geek Breakfast review was in April of 2009, almost a year later and I want to see if it is just as good, better, or worse as it was last year.  I love my coffee and I can very particular about it beer.  I don’t like the astringency I find in a lot of coffee beers, but a well done coffee stout can be heaven for me. 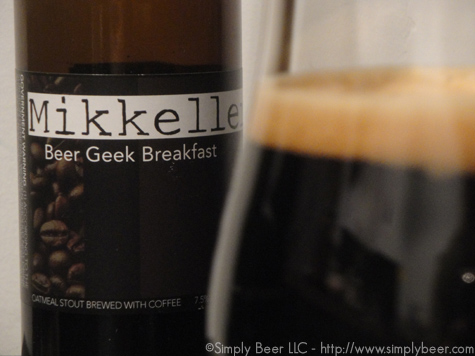 Here is how Mikkel Bjergsoe (Mikkeller) describes the beer:

Breakfast is the most important meal of the day, many say, and if you are a beer geek there is no better way to start the day than with a powerful, complex morning stout. The unique mix of oats and coffee gives this beer large body and power, while the coffee, at the same time, creates a nice balance.

This beer is dark as night, there is no light penetrating through this beer even on the edge of the glass.  The head on the beer is almost as dark, one of the darkest pillows of foam I’ve seen on a beer, not only that, there were swirls of different shades of brown ranging from chocolate brown to tan.  Pretty cool.

The aroma doesn’t disappoint, coffee for sure, but there some really nice roasted malt and smoke undertones along with anise and bit of musty earthiness.  It’s Very intriguing.

Oh soooo smooth, the oatmeal stout base beer just coats your mouth with this thick velvety goodness.  Right up front your greeted by coffee and smoke.  There seems to be a lot more smokiness in this batch then last, but I’m really enjoying it.  I wonder if there is a different coffee being used, while very prominent in the beer it tastes different, more earth and smoky.  I’m also really enjoying the finish on this beer.  It goes from bittersweet chocolate into this lingering light smokey bitterness. 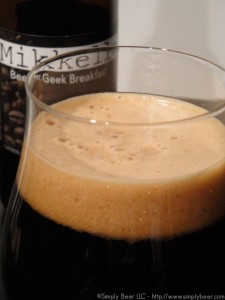 Once again a delicious Mikkeller beer.  One of the few “breweries” that doesn’t let me down with the beer they produce.(Mikkeller doesn’t actually have it’s own brewery.)   I really enjoyed this beer; I though it was excellent, but not exactly like last years.

Have you tried the two versions, what did you think?