I’m a hophead, I’ll admit it.  I absolutely love beers with lots of hops.  The aroma that hops can bring to a beer is such a wonderful part of drinking an IPA, especially when you get into Double India Pale Ale (DIPA) and Imperial India Pale Ale (IIPA).  The Hercules Double India Pale Ale from the Great Divide Brewing Co. is no exception at 85 IBU’s and 9.1% ABV, it is a big hoppy beer. 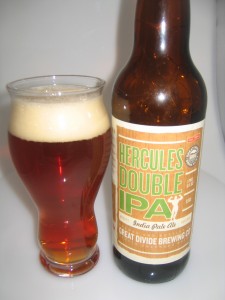 Give it a good pour, make sure you get a good inch of head on the beer.  This will help open up the aroma of the hops.

A really pretty, clear, copper/crimson color.  A good creamy thick head that lasted the entire glass.  Since there is such good head retention with this beer, there was also lots of lacing.

It’s a DIPA, it has to have great aroma.  For me, it is a good part of why I love DIPA’s and IIPA’s.  I love to stick my nose in the glass and just inhale the aroma.  I do the same thing when I’m boiling the hops as I brew.  The Hercules DIPA has a very hoppy flowery aroma common for this style, with hints of pine and orange-y citrus.  I would recommend taking a nice big breath through your nose as you are taking a sip, it really adds to the whole drinking experience.

A very well balanced beer, not overly malty.  Tons of hops balanced nicely with a caramel sweetness and a hint of citrus.

Delicious.  Drinking my second bomber as I write this review.  The high alcohol content is not really noticeable on the palette, but it does creep up on you.  But the alcohol is not the dominate aspect the 85 IBU’s really shine through, the hops are both aromatic and flavorful.  A definite must try for any other hop head!