I’ve been seeking a lot of west coast / midwest beers that I can’t get in New Jersey.  On the plate tonight is Hangar 24’s Orange Wheat. This beer was sent to me in a beer trade by Thomas Ham, otherwise known as the Average Beer Snob. I had never heard of this brewery before Thomas sent me this beer.  Now, I’m not the biggest fan of wheat beers, but I can definitely appreciate them and an Orange Wheat sounds particularly intriguing to me. 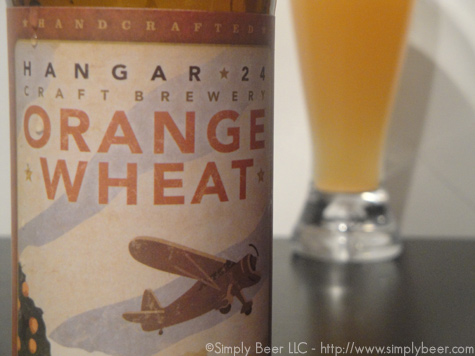 Here is how Hangar 24 describes their beer:

Crisp, Tangy, and Refreshing. The citrus aroma, light airy mouthfeel, and tangy finish are this unfiltered beer’s trademarks. This is accomplished by adding whole locally grown oranges throughout the brewing process, which perfectly coalesce with the wheat and barley base.

Our oranges are purchased through the Old Grove Orange company (affiliate of the non-profit Inland Orange Conservancy) whose main objectives are to save the local orange trees from disappearing, spread the word about the local citrus growing heritage, and to feed the hungry with the unutilized oranges. Please visit them at www.inlandorange.org. All we need to do to save the orange trees is to eat or drink locally grown oranges! 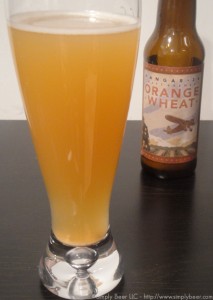 The Orange Wheat poured a cloudy orange straw color with tons of sediment, huge chunks in fact.  I usually try to get the yeast into my glass with wheat beers, but these were chunks half the size of dimes.  Pretty darn big in my book.  Initially had a head about a half an inch with a hard pour, that quickly dissipated into a thin collar.

A very orange yeasty beer, there is a slight acidic tang on the nose.  It actually had quite a bit of aroma, more then I expected out of a wheat beer.

Lots of orange in this beer and a very light mouth feel. There was a pretty significant yeast presence which was balanced fairly nicely with the orange.  Tasted almost like a yeasty Orangina, even had that bit of a twang under it all.  Down side of this beer, it turned almost flat halfway through the glass.

If it were about 50 degrees warmer outside and I was on my back patio grilling up some ribs, I’d be in heaven.  I was also hoping for a bit more carbonation in this beer, but all-in-all it would be a nice refreshing summer beer.