It’s not everyday when there is so little published about a Beer.  The Chatue Rogue First Growth Wet Hop Ale is just that.  Nothing on the Rogue website about the beer, a couple blog posting, and some reviews on Beer Advocate.  But who am I to listen to others anyway… 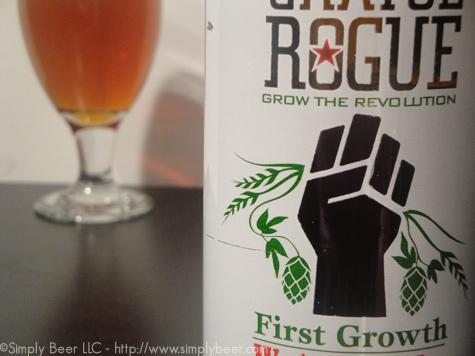 As described on the bottle, this wet hop American Pale Ale created “with hops from Rogue’s Micro Hop Yard in Independence, Oregon.  Raw Hops are picked stu fed into burlap bags, driven immediately 77 miles to Newport, Oregon and pitched into the brew kettle.” 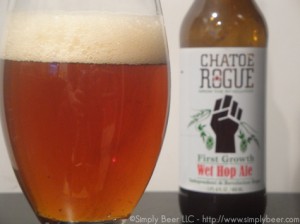 Pours a clear deep amber, lots of carbonation bubbles in the beer.  A nice pale head sits on this beer, pretty good head retention, and some decent lacing.  Had some yeast in the bottle, the second glass was much cloudier, a bit of sediment I suppose.

Not what I would expect from Rogue.  I expected a significant hop presence, what I got was a slight caramel malty aroma a bit of pine and subtle hint of licorice.  I was actually kind of a let down by the aroma.

I thought this was a good American Pale Ale, nothing off-putting about this beer.  I don’t get the wet hop, it didn’t add anything to the beer in my opinion.  I’m not sure how wet hops adds anything to this beer than dried hops.