I’ve been seeking a lot of west coast / midwest beers that I can’t get in New Jersey, such as Lost Abbey.  On the plate tonight is Lost Abbey’s Avant Garde. This beer was sent to me in a beer trade by Thomas Ham, otherwise known as the Average Beer Snob. I really like the way lost Abbey describes their beer:

At the Lost Abbey, we pride ourselves on producing beers of the highest quality and distinction. Avant Garde is our commitment to brewing beers to no particular style. Some might want to label this as a beer brewed in the Biere de Garde tradition of Northern France. We would prefer to say it was brewed in the Avant Garde style of beers that will reward all those who seek the not so ordinary. Deep gold in color with hints of biscuits, caramel and fresh baked bread, this beer is sure to delight the senses and palates of consumers everywhere. Available in 750ml bottles and on draft at select inspired locations.

This is an amber orange beer, fairly cloudy, tons of carbonation with a decent clingy head.  The bubbles coming from the bottom of the glass were non stop, they make for a nice little beer show. By the end of the bottle, the beer was very opaque, I couldn’t see my fingers on the other side. 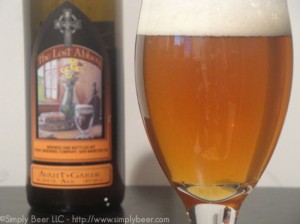 The aroma on this beer was a bit subdued, but then again it is a farmhouse’ish style ale, so i wasn’t expecting a whole lot.  On the nose I was able to pick up a bit of orange, a bit of spice (ginger), and a lot of bready yeast.

As far as the taste, it was very drinkable, but not what I was expecting.  Perhaps something a bit more peppery. I found it to be very buttery creamy with a touch of bitterness on the back end.  The middle mouth was very quiet, but did have a bit of honey like sweetness.  To my palette it had more of an ESB flavor then Farmhouse style ale as the label describes.

Glassware: I used a narrow goblet, but most glasses would work with this beer.

I found this to be a very drinkable beer and rather enjoyed it, it just didn’t fit into a farmhouse style for me.  It looked and acted like one but just didn’t have the flavor of a farmhouse ale I was expecting, nonetheless would gladly drink again if one were to land in my fridge!