My first taste of the Flying Dog Double Dog was in Beer Brawl 4.  Since then I’ve been looking for a reason to have it again.  Well, no reason is as good as any reason. 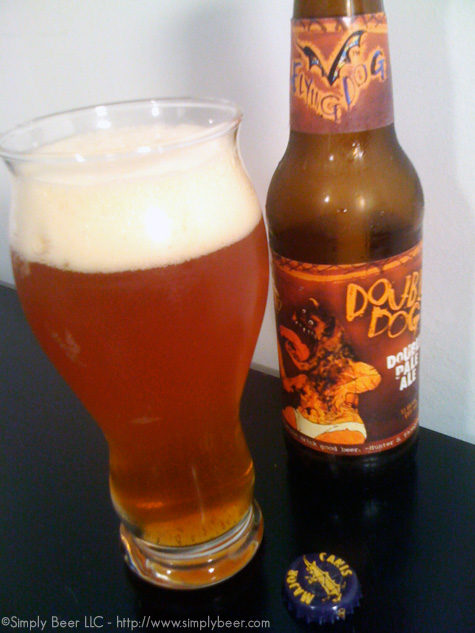 Tons of carbonation, bubbles are just streaming up the middle of the glass.  A slightly hazy coppery orange beer, nothing special, but the head on this beer is thick, creamy, and tons of lacing, very inviting.

Great aroma, sweet caramel notes with lots of floral hop aroma, even some cotton candy.  This is one of those beers that you just end up smelling for awhile, it smells so good.  The aroma in this beer builds up the anticipation in hopes of drinking something special.

11.5% abv?  There is something there, but the alcohol is expertly hidden behind big buttery creamy initial flavor that is rounded out with a nice lengthy bitterness.  There is a touch of sweetness to the beer which seems to hide some of the abv. A very enjoyable beer.  don’t let the abv scare you away from this beer.

This tastes like a souped up English Pale Ale with an American hop twist.    The big buttery flavor with tons of hops works well together and compliments the aroma.  What a great, big beer!