Preparing myself for an assault on my taste buds.  Tonight’s beer is the Hoppin’ Frog Mean Manalishi Double IPA, 8.2 % abv and a whopping 168 IBU’s.  That a boat load of hops!  I’m anxious to see if the Manalishi is able to hold up to that landslide of hops.  This Ohio brewery doesn’t list the hops that are used on the bottle, but their web site does mention Columbus and Summit hops. 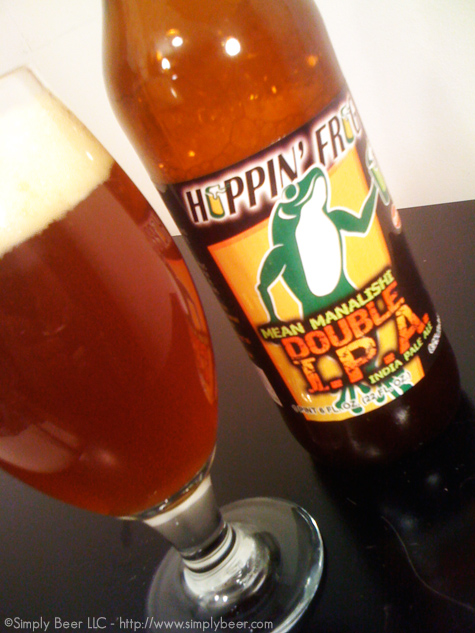 This IPA is a hazy copper color beer, indicative of bottle conditioning with a fairly clingy head.  While the foam in the center dissipates quickly there is a good hold on the glass by the foam on the out side creating a donut effect with the head.

A DIPA should have a big aroma, nice piney orange on top, with underlying caramel toasty aroma under the dominant hop nose.  It’s not a knock you socks off which you may expect from a 168 ibu beer, but is a very clean and refreshing aroma.

I’m enjoying this beer, it has a big buttery creamy flavor right up front, which moves into a toasted malty orange flavor.  It is a unique flavor combination for me.  I’ve had toasty and orange in the same beer, but never one that I wanted to go out and deep fry a creamcicle covered in cereal.  It is really a nice flavor.  As that flavor subsides like the first wave of a tsunami,  your mouth is rolled over and over again with this bitterness that sticks and doesn’t go away, it just keeps coming and coming, but doesn’t become overwhelming.  I’m a fan!  Oh and your burps taste like hops, that’s pretty cool!

If you haven’t had this beer, go out and try it.  If you have, what did you think of it. The heavy malt and heavy hops work really well together.  I really enjoyed this beer, want another!