To be quite frank, I’m really not a fan of organic beers.  Unlike some foods, I’ve never found an Organic beer to better than a “Traditional” beer and quite often I have found them to be sub par.  Then again I’ve never seen an USDA Certified Organic Imperial Stout. 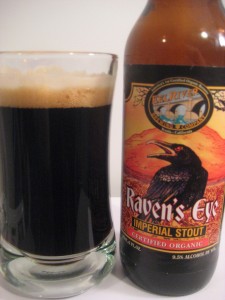 Give this beer a good hard pour to unleash this beer. With a nice large head to open up the aroma was a nice start this beer

This stout was ink black with a creamy amber head.  As the head dissipated it left a solid ring around the glass, not lacing, but a solid ring that was 3/4 inch thick… pretty cool.

Traditional coffee and chocolate notes dominated this Stout.  Hits of hops and a touch of malty sweetness were present

Nice coffee bitterness with a thick chewy chocolate finish.  Beer was very smooth, felt the hops were nicely balanced with the malt.

The 9.5% alcohol is barely noticeable; it goes down nice and easy.  i wish i had chilled the second bottle of this stout.  Not sure If I would consider this and Imperial Stout, I would expect more hops in an Imperial stout.  I’ve had 100+IBU Imperial Stouts (Boaks Monster Mash) which are truly an Imperial Stout and I don’t think this was one of them, but with that said this was a very good beer.