So what does a Maple Syrup Dark Ale and a Oatmeal Stout have in common?  Nothing really, except I finally got to brew them!  I’ve had this Maple Syrup ale for 3 months and I just now brewed it. 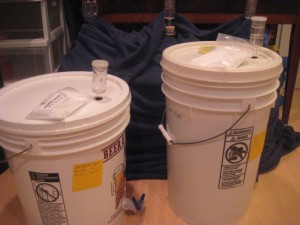 Maple Ale and Oatmeal in primary

I got pretty excited to drink this beer as I brewed it.  6lbs of DME (Dark Malt Extract), a Pint of Vermont’s finest… I love dark beers.  I just hope this one won’t be too sweet.  I added the pint of Maple Syrup in the last 5 minutes of the boil instead of the last 15 minutes to get a bit more of the Maple Syrup aroma.  This boil smelled so good with the syrup and the cascade hops at the end.   Even though I overshot the final gravity by about 8points, I’m really optimistic about this beer.

If I’m going to brew and I have the raw materials, I’m going to try and do as much as I can.  This time it was 2 batches, 10 total gallons.  The other batch was an Oatmeal Stout.  This is a perfect beginner recipe, so simple and such a great style of beer.  With only 1 oz of hop and 6lbs of DME, it was a no brainer.