Days in the Cellar are done 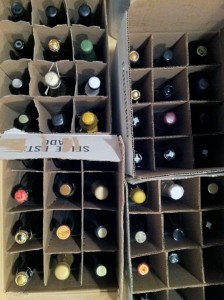 It’s been fun collecting bottles of beer over the last five years or so, but my days in the Beer Cellar are done…. for now.  Over the last couple of years I have spent way more money on craft beer then I probably should have building a collection (of now) rare and unique beers.  However over the last year I have been wondering why.  I have all this crazy beer and I don’t want to drink it.

Well that is not entirely true, I do want to drink it, but I want to share it as well.  I don’t want to just sit in my basement and slowly drink through all this rare and exotic beer and not have anyone to share it with.   I’m doing what any other crazy nutty beer geek would do, give it all way to my friends and family at Simply Beer’s 3 year anniversary party. I know I could have made a bunch of money on eBay with it, but I’m just not down with that, especially since I want to drink it!  The Anniversary sampling should be a wicked time, but doesn’t truly explain why.

Beer, for me, is a social experience. I love to have beer with friends, family, and strangers.  Having all this beer, which is really cool and it’s coolness factor still does appeals to me, but  I’ve started to change my opinion on why aging beer is good.  I’ve found for me it is really only fun if you can keep sampling it along the way, see how it evolves and have people to share it with.  With my job and family I tend not to get out a lot to meet my expectations on aging. Most of the beers I have been aging, I have never had.  Sad I know, but true.  No more beer hording If I don’t have enough beer to keep trying over a year or two, it is getting drunk!