An Expectation of Quality, Can it Make or Break a Brewery 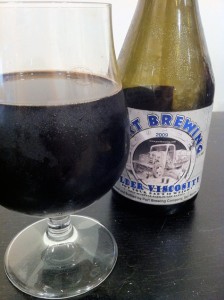 Most of the craft beer breweries we are accustom hearing about are growing by leaps and bounds, Brooklyn Brewery, Dogfish Head, Russian River, Boulevard, Sierra Nevada, and Allagash among numerous others. We’ve all heard the stories about Dogfish Head trying to make things right with their customers and even dumping a whole batch of 120 minute Imperial IPA. As these breweries continue to grow there is a threshold where there is an expectation of quality that can make or break a brewery.

The brewer was the center focal point for most breweries, but as the breweries grew the brewers become more and more a face person having to do festivals, events, personal appearances and more, leaving the brewery in the trusted hands of their employees. For some breweries this has worked out great, they continue to make quality year round beers and impressive seasonal. However for Lost Abbey starting in 2009 they suffered some serious issues. Almost everyone who knows Port Brewing/Lost Abbey and their beers knows about their carbonation issues with many of the 375ml corked bottles in 2009 and 2010. This caused a great many of their supporters/drinkers to unleash tirades about the quality on any forum they could find. I’m not here to do that, in-fact quite the opposite.

If you follow me regularly on twitter (if you don’t you should!) you know that I have stopped collecting beer and I’m in the process of drinking though all these beers I have collected over the years. I had put a boatload of beers in the fridge including 5 Lost Abbey/Port Brewing Beers. My first was a 09 Brandy Barrel Angel Share. Flat, but ok I could deal because the beer was so freakin’ good. Next was a 09 Older Viscosity (Port Brewing) and like the Angle Share it was wicked tasty, just flat and I tweeted that.

As it turns out Gwen is the New Director of Quality Assurance at Lost Abbey. It was refreshing to see a representative step up, right away, to see what the problem was. After our initial twitter exchange we exchanged several emails as I tried the rest of my Lost Abbey 375ml bottles. Over the next several days I had 08 Angle Share, which were still nicely carbonated, a couple different 09 and 10 Angle Shares and share my thoughts on the beers with Gwen. What I noticed about the beers that were flat versus the ones that weren’t was the ease of which the cork came out of the bottle. Maybe the manufacturing of the corks were off by a hair, just enough for the bottles to loose pressure over time.

I certainly did not expect a response from my tweet, but you take a response like this and it renews my faith that while many Craft Beer Breweries are still in their infancy, they are proud enough to correct their mistakes. I know that Lost Abbey is going to comeback strong with their Barrel Aged Dark Ales and win back those people who have lost faith. In a world where you are only as good as you last beer, mistakes can hurt. But, it is the ones that can learn, correct, and adapt that will succeed.