IPA Glassware, Does it Make a Difference

My family has always been extremely supportive of my beer endeavors, for Father’s Day I received a set of 4 IPA Glasses crafted by Spiegelau in collaboration with Dogfish Head and Sierra Nevada.   First and foremost, these are cool looking glasses, regardless if they make an IPA better; I’ll still be using these glasses.  Back to the fun, with my In-laws over for dinner on Father’s Day we thought it would be fun to see if these glasses were better then the glass what I usually use for IPA’s, a Pokal glass.   With a sixpack of Dogfish Head 60minute IPA in hand, the fun begins.

For our unscientific test, we used two bottles of Dogfish Head 6o Minute IPA from the same 6 pack

I did my best to try and pour the two beers at the same rate, since a harder pour will produce a bigger head and release more of the hop aroma. What I found is the IPA glass want to release a big head as you pour it and the glass has the volume to hold it.  The ridges at the bottom of the glass create turbulence, exciting the beer, resulting in more foam.  With a slightly steeper angled pour then I did in this picture, you get a significantly larger head that fills the void at the top of the glass.. 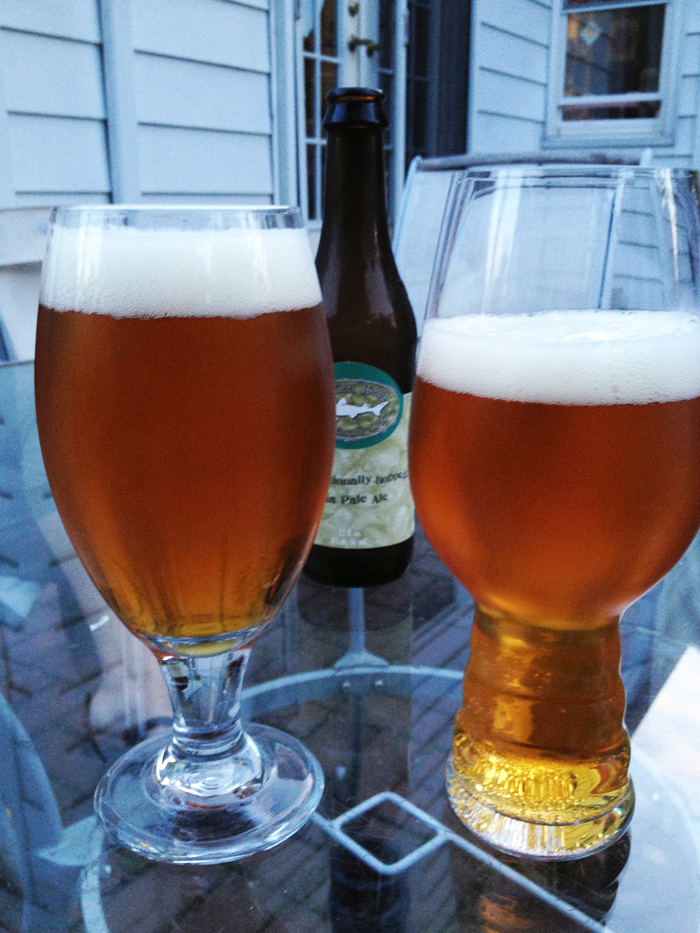 Initial pour with the glasses at roughly a 30° angle.

Lacing on the two glasses appear almost the same

Initially these beers looked, smelled, and tasted virtually identical.  The IPA glass did have a somewhat stronger aroma; it did have the extra empty space above the head and below the rim of the glass.  We felt that there wasn’t much of difference between these two glasses as we started our tasting.  The shape of the two glasses is very similar at the top which is why these glasses were drinking the same  when we started.

However as we continued to drink the beers, we found that beer from the IPA Glassed continued to retain more of the initial aroma and flavor then the other beer.  In retrospect I wish I have compared this to a regular pint glass, I bet the results would have been more dramatic.

Who else has used these glasses did you experience the same as us?