I’m lucky enough to have a cadre of beer enthusiasts in my office.  When we saw that the NY Craft Beer Week featured 83 different venues and 162 unique beers (check out the website for details www.nycbeerweek.com), a seed was planted.  We had to find out what the buzz was about.

On a quiet Tuesday we put in for some time off and hopped on a bus for the Big Apple with a plan to arrive just about lunchtime.  I’d suggest you plan to be there later in the afternoon since all of the planned events were scheduled for 4pm and  later.  We couldn’t stick around for stuff like Sam Calagione at the Blind Tiger or the brewers of Brooklyn, River Horse, Boulder and Goose Island all at Rattle ‘n’ Hum!  But, we were playing hooky from work on a perfect September day so, what the hell!

A short walk from Port Authority Bus Terminal landed us at the Ginger Man.  The G-man is one of my favorite bars on planet earth!  A knowledgeable staff, intelligent beer selection (60-something taps!) and a cool atmosphere makes it a must stop.  I started with the draught selections of an Oaked Bastard and a Chicago style hot dog – a deal at 5 bucks- then to a Unibroue Terrible, need I say more?  I finished up with a Stone Ruination on the cask.  I’ve had it in the bottle, but the cask presentation introduced some fruity complexity and balance that the bottle just doesn’t have.  Heaven. 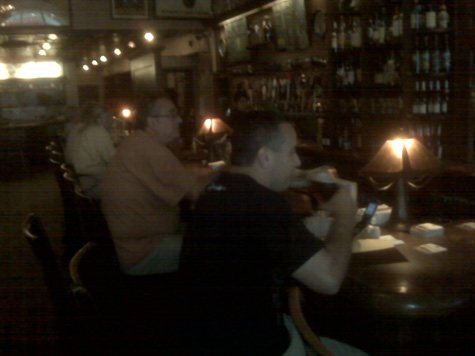 The boys soaking it up at the Ginger Man

The other favorite stop of the day was Rattle ‘n’ Hum which was only a few blocks away.  Folks, they have a seperate cask menu!  20+ beers on cask!  Since I now had a taste for hops, I sampled the cask version Six Points Hops of Love and the Ballast Point DIPA.  More than enough to satiate any hop head.  We also took advantage of a great NY Beer Week idea; special 8 oz tasting glasses emblazoned with the beer week logo.  That was a brilliant idea!  With so many special beers available only for this event, it makes choosing your next one a lot less stressful, believe me! 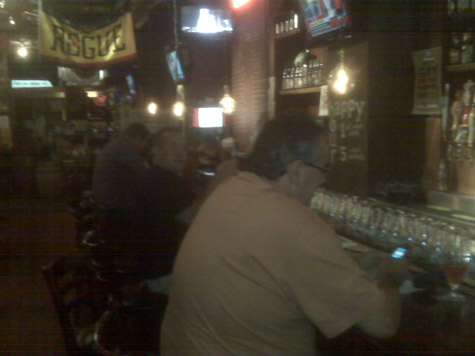 Even if you can’t be there for the dizzying array of special events (check out the Passport program), you’re going have a great time anyway. It must have taken an enormous effort to coordinate the event over so many places.  Obviously, brewers pulled out all the stops to bring the greatest of beers to the greatest of cities.  There’s another weekend left, so get there already!