I was not able to attend the live showing of Beer Wars in my area, but I have since seen this documentary on DVD several times.  Regardless of how the theater showing of the movie came off, the intent and purpose of the movie makes it a must see for anyone remotely interested in beer or documentaries. 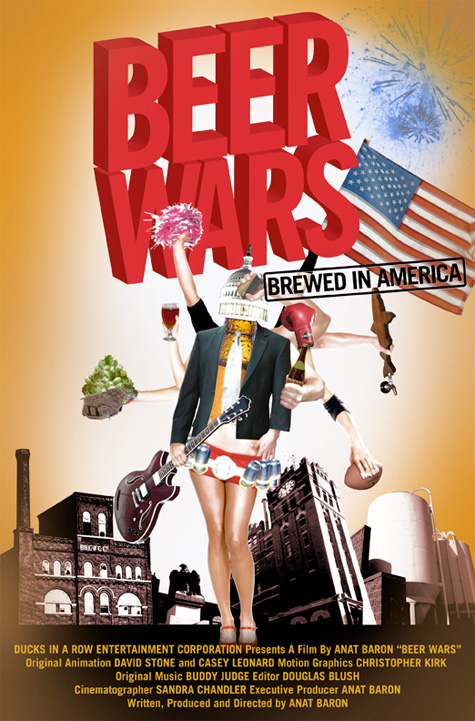 Without giving away the movie, Anat Baron walks the viewer through a good basic lesson on the history of beer in the US from Prohibition to Modern Day.  You have to see some the commercials that were included from Anheusher-Bush, pretty funny stuff.  But, seriously it depicts how the major Macro breweries ate up, consumed, and spit out the little guys until there were hardly any breweries left in the 70’s.  Now, the Big 2 breweries (Anheusher-Bush and Miller Coors) make up 80% of the beer market.  And now Anheusher-Bush accounts for 1 of every 2 beers sold in the United States!   Beer Wars also gives us some mind numbing statistics on the dollars spent by these companies on advertising, I’ll let you watch the movie to be shocked.

Beer Wars is not just about the Big Boys and their monopolistic advertising machine, the Documentary also follows 2 people in the beer industry and their struggles to get a foothold in the market.  The first, most of us have heard of and have a ton of respect for his efforts in brewing, is Sam Calagione, founder of Dogfish Head Brewery.  The movie gives a good back ground on Dogfish Head in Sam’s own words, how they struggled to get to where they are and the struggle to continue to meet demand going forward.  I have to say, Sam Calagione was a great pick for this movie; he has a ton of charisma, passion and is very well spoken.

The “heroine” in Beer Wars is Rhonda Kallman, the former Co-founder & Executive VP of Sales and Brand Development for Sam Adams.  She is starting a new company Moonshot, when this movie was filmed; the first beer with caffeine.  I’m going to leave out my personal opinions about this beer and the nature of it vs. craft beer.  What I thought was interesting about following Rhonda instead of another rock star craft brewer,  how difficult it was to get her beer to market and in the stores and bars.  Maybe that in of itself says something about the beer?  She basically took the Sam Adams brand from nothing to a nation wide household name and yet she can’t get the time of day with investors or the major breweries to market or sell her beer.    I can say I was not a fan of the beer or the “in it for the money” sense I got from this part of the story, but it was different and gave the documentary some depth and different perspective.

As a parent I’d be remiss if I didn’t say, I felt there was almost an intrusion into the personal life of Sam Calagione and Rhonda Kallman that I could have done without.   Throughout the movie we were able to see glimpses into both Sam’s and especially Rhonda’s family life.  It does show them as “human” instead of a corporate machine, but still, for me family is a pretty sacred thing that the public doesn’t get to see.

Beer Wars has a serious and interesting story line, but there are also some very humorous asides as well that keep the movie rolling.  The Bud Light, Coors Light, Miller Light blind taste was very funny, idiot after knucklehead saying I’m a “Bud Guy” or “I only Drink Coors” couldn’t tell their “beer” from the other two kidney byproducts.  There were a bunch of short commentaries from some of the other “Rock Stars” of the beer world, including Dick Yuengling, Jim Koch (Boston Beer), Kim Jordan (New Belgium), Carol Stoudts (Stoudts), Charlie Papazien, and My favorite was Greg Koch’s angry brewer rant.

Overall I really enjoyed this movie and I’ve watched it several times; there’s a great mix of history, politics, humor, and brewery ambition in this movie to make it entertaining, informative, and a must see for beer lovers.

Leave a comment below to win a DVD copy of Beer Wars! (contest rules)