Got out for a liquid lunch today, can’t go wrong ending a long work week like that. Meet up with a buddy at a bar/restaurant in Montclair NJ called The Office (http://www.office-beerbar.com) to vent about the week. I’ve been going to this place for years with the family, pretty good bar food and a nice selection of beer. I’m a sucker for variety and if I can get a regularly get a bottle of Samuel Smith’s Oatmeal Stout; I’m a pretty happy camper. 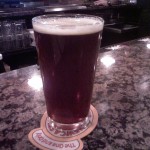 I started with an Arrogant Bastard Ale on tap. I really like this beer, so overwhelming in all its flavors; it really leaves an impression on you. But wouldn’t ya know it; they poured it right into a frosted/frozen pint glass. This has got to be one of my biggest pet-peeve. This ain’t a F***ing Coors, you don’t need to freeze the beer! 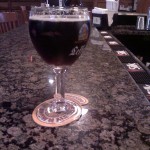 My drinking buddy had a Left Hand Bock (I think). He seemed to like it. It was server in a Goblet at a good temperature. Not to bash too much on the bar tender, but as my buddy was asking him about this beer, he kept comparing and referring to it as an ale. I had a good laugh on the inside, but as I learned in college – Don’t insult or piss off your bar tender if you want any decent service. 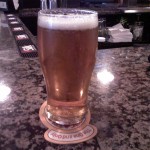 After a very “disturbing” conversation about tattoos with the bar tender, I finished off the lunch with the Victory Double IPA on tap. I saw the bar keep going again for one of those frosted glasses, so I quickly yelled at him to get me a room temp glass. I found the Victory Double IPA to be good, but nothing extraordinary for the style of beer. Of course there were lots of hops and good bitterness, but no OMG reaction to justify the price.