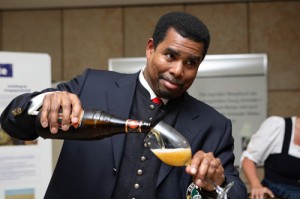 Be a part of an incredible evening & support a truly great cause at Amanti Vino’s first ever Wine vs. Beer Competition Dinner:  Cru Vs Brew!

As we mentioned above, the theme of this event is a competition!  Fred and Garrett are tasked with  selecting a wine (from Amanti Vino) and beer (from Brooklyn Brewery) to pair with each of Ariane’s challenging, mouth watering courses described below.

At the conclusion of each course, a panel of judges (including Peter Kennedy from Simply Beer) will evaluate the success of Fred and Garrett’s pairings and select a winner.  But wait, you count too!  We will also poll the audience after each course and will include your vote in the tabulation.

A limited number of tickets have been reserved for Simply Beer readers.  To purchase tickets to Cru vs Brew, please  call (973) 509-WINE (9463) and mention Simply Beer.  Act quickly, these tickets are sure to sell out extremely quickly! If you are unable to join us, but would like to make a donation to World Cares Center, please contact Sharon Sevrens at sharon@amantivino.com.

We look forward to sharing this amazing evening with you in support of a worthy cause!