It is not to often you get the same beer made by two different breweries, but when you do, I felt obligated to do a side by side comparison.  The Brooklyn-Schneider Hopfen-weisse and the Schneider-Brooklyn Hopfen-weisse  are the brain children of Garrett Oliver from Brooklyn Brewery and Hans-Peter Drexler of the Schneider Weissbier Brewery.  I was at a Garrett Oliver lecture recently and he said these two beers are identical except for the hops and yeast.  The Schneider-Brooklyn version highlights the Hallertauer Saphir hops while the Brooklyn-Schneider version highlights aromatic American hops. 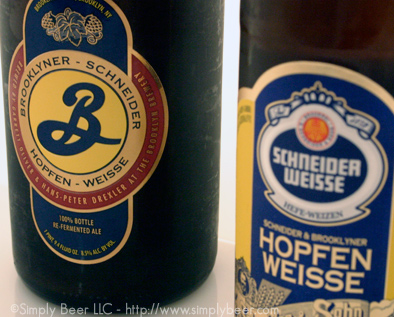 Brooklyn – lighter orange color, monstrous billowy head, torrent of bubbles, extremely long head retention, hard to get the yeast out of the 750ml.  once I got the yeast out the bottle the color was identical to the Schneider.

Liked the head better on the Brooklyn, but liked the smaller bottle of the Schneider to be able to get the yeast out easier.

Could smell the hops right out of the bottle on both.

Brooklyn – very floral bit much more pine notes, pretty dominant fruit aroma of orange and mango.  Some honey and bubblegum to it as well.

The aroma from the Brooklyn was really in your face, how I like it.  At the same time the Schneider was extremely well balanced with the taste of the beer. 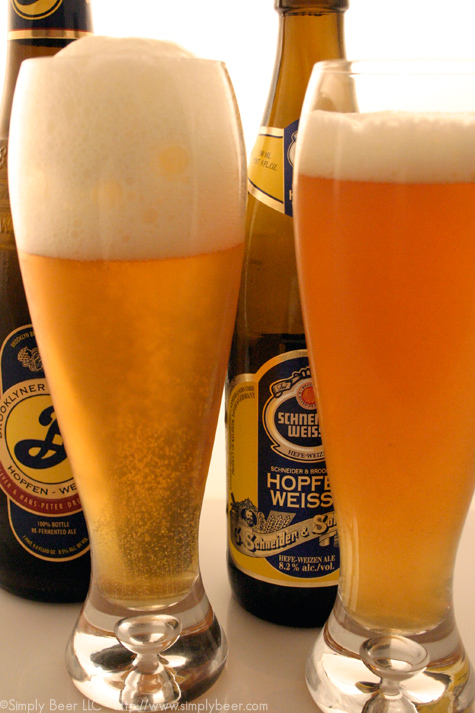 Schneider – yeasty, bready and malty, which move to a quick hit of citrus grapefruit sweetness into a blast of traditional German spiciness which subsides into a nice mellow bitterness.  A very complex, beer.  the beer really coats your mouth, but at the same time leaving it very dry.  After a couple of sips you start getting some subtle banana flavor.

Brooklyn – Sweet is my initial impression, after a couple sips my palette starts picking up lots of flavors.  An interesting sweet yeasty upfront flavor, much longer lingering citrus favor in the middle, not real spiciness like the Schneider, but the bitterness of the finish lingers a bit stronger.

Schneider – Not as bold as the Brooklyn version, but a very complex beer, well balanced aroma with the taste.   8.2% abv is completely hidden.

Brooklyn – Not as complex as the Schneider version but much more dominant hop profile. AS with the Schneider the 8.5% abv was completely hidden

Two great beers, each one with the same base malts, but with different hop additions make for 2 unique beers.  Each one of these beers stands on its own as a unique beer and together they make for a unique pair.  If you haven’t tried either of these I would highly recommend try them and if you can try them together.