One of my favorite breweries of late has been Allagash Brewing out of Portland Maine.  I love Belgian beers and so far I have only had good beers from this brewery specializing in Belgian style.  On July 22nd I had the pleasure of attending an Allagash tasting at the Iron Money in Jersey City, NJ,  held on their roof top bar.  If you never been to the Iron Monkey, it is basically a row house converted into Bar/Restaurant.  Bar on first floor, dinning room on the second, kitchen on the third and Bar & Dining on the roof.  It was a perfect night for outside drinking.  Temperature in the 70’s, nice sunset, no threatening rain, and a nice breeze.  Oh, Did I mention it was my birthday?  Having my wife surprise me with this “Meet the Brewmaster Tasting” made this night all the more fun! 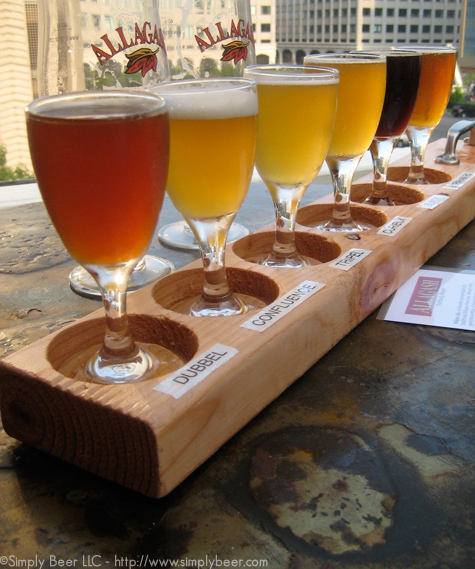 We got there a bit early, while the taps of 6 Allagash beers were ready, there was only a couple of people floating around the bar.  One of those people was Rob Tod, the Founder of Allagash.  After introducing ourselves, Rob brought over a couple glasses of Allagash White and sat down with us.  A very friendly guy, we talked for about 30 minutes about his beer, my beer, family, and of course the past and future of beer.  I really enjoyed talking with him,  a down to earth guy and his candor was refreshing.   After meeting Rob and talking with him, you can really see why the beer Allagash releases are consistently good.  He cares.  He cares about the beer and the people around him. 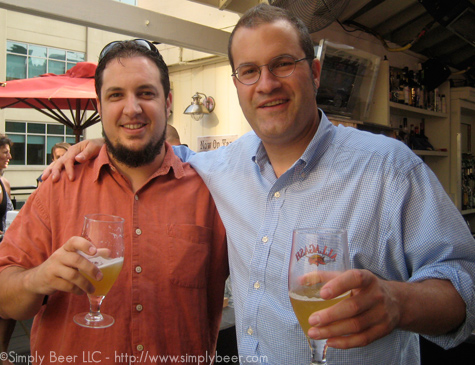 Now to the fun part the tasting.  This tasting was more informal then many I’ve been too,  you were left to sample the beer on you own.  Which actually was pretty nice for the time and place we were at.  I had an index card with the beers; I was able to taste at my pace, enjoy the weather, and atmosphere.  You had a choice, taste individual full size glasses or a flight of 6 beers.  I choose to do a flight of all the beer so that I wasn’t to inebriated and could take some notes.  On my flight plan tonight was the Dubbel, Confluence, Tripel, Curieux, Black and Burnham Rd.  Lucky for me I’d only had 2 of the six beers, but was also hoping that Interlude would also be on the tasting list. 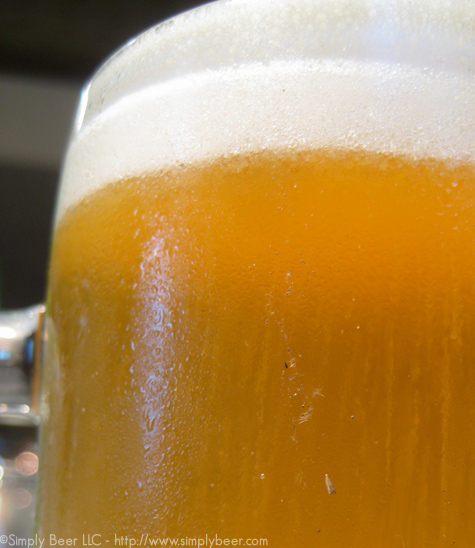 Dubbel, first time having it on draft, I liked this beer more then last time.  Having previously reviewed it, I found the mild antiseptic taste was not present in this sample and the bitterness was a bit more muted then in my previous tasting from batch #77.

Confluence, my first thought when I tasted this beer was, Yummy.  I know, a bit childish, but the sweet and tart of this beer really came together beautifully.  The beer also had a bit of spice in between making a nice transition from sweet to tart.  I think this was my favorite beer of the flight.  After I finished my flight I think I had 3 more mugs with dinner.  Just by chance, I was drinking this beer with the brushetta we ordered that had some sort balsamic sauce on it; the beer and balsamic was a wonderful combination.

Tripel – also my first tasting on draft,  I had previously reviewed it (batch 113) and featured it in Beer Brawl™ 13, thankfully it lived up to my expectations. So, I really didn’t right any notes.

Crurieux – WOW, I mean come on, guys.  You take a excellent tripel and age it in Jim Bean Barrels for 8 months, I didn’t think the Tripel could get any better.  You nailed it!  I loved the additional flavors added to the Tripel of vanilla,  coconut, and that earthy oak taste.   Well balanced, not over oaked.  My second favorite beer of the flight.

Black – The darkest beer in the Allagash lineup, as implied by the name.  This is a Belgian Style Stout, it was like a combination of a dubbel, oatmeal stout, and coffee stout.  It had a pleasantly strange mouthfeel.  It looked like a stout, smelled like a coffee stout, tasted like a breakfast stout, but had this rich silky light mouthfeel.  I gonna have to find this somewhere and try it again.  I really enjoyed it.

Burnham Rd – This is a Smoked Belgian Style Smoked ale.  I felt this was way over smoked, I felt as though the smoke covered up all the other aromas and flavors in the beer.  I’m not a huge fan of smoked beers and this was a bit too much for me. 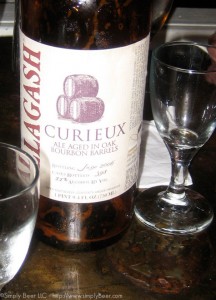 After the flight of beer my wife and I went downstairs for dinner in Iron Monkey’s Dinning room where we had a pretty good dinner and after dinner I went back upstairs for a glass of Curieux and to talk with some of the people from Allagash.  I must have good timing or good birthday karma, because I walked into a tasting of a bottle of 2006 Curieux.  I the 2006 was amazing.  I will be buying another bottle of Curieux so I can drink the bottle I’ve had for a couple of months, then age another for a couple of years.

I had a great birthday night of drinking some delicious beers and meeting some great people, especially Rob Tod.

I’m looking forward to some new beer from Allagash.