One of the things I love about Stone is their labels.  One of the things I hate about Stone is their labels.  They are pretty funny and insulting at the same time.  The 13th Anniversary beer is no different, right of the bat they are telling me don’t cellar the beer.  I wasn’t planning on it, but since you told me not to, I think I will.  But when it comes down to it, I love labels but I don’t drink beer for the labels or name on the beer, I drink beer for the beer.  Quite frankly if you have a super cool or ballsy label, your beer better be that much better!  On to the review! 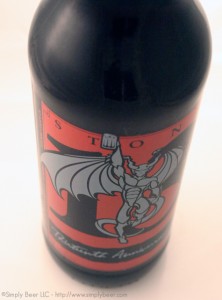 Deep mahogany red beer with a modest amber head with decent lacing.  Looks to be a fair amount of carbonation in the beer, as I see bubbles rising near the side of the glass.  Has a fairly transparent for such a deep color.

A very hoppy red ale,  the aroma is predominately orange, chocolate, and plum with a faint wisp of alcohol and a bit malty.  Not sure what I was expecting out of the aroma, while pleasant, it wasn’t what I thought it would be.   I think most Red ales I’ve had have always been fairly low in the aroma department.

Very malty and hoppy.  Highly carbonated, it really tickles the tip of your tongue.  After the tongue tickling, you left with a strong malt presence which quickly moves into a amped up hop bitterness.  The bitterness lingers for a long time and it really is touch and go if it is going to cross the line into a burnt flavor.  Thankfully it never did, but made it pretty interesting to drink as each sip flirted with that line. 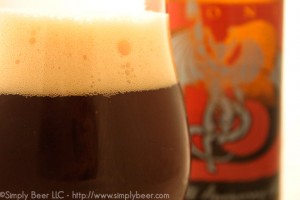 For my palette, I’m just not in sync with this beer.  The bitterness in this beer was not well balanced with the malts, it played out more on the bitter side then on the malty side.  I did like the aroma and the color of the beer, but the unbalanced flavor really did it in for me.  I mentioned a slight alcohol aroma, but the 9.5% abv was masked fairly well.

Drinking Glass: A typical red would be a Pint glass, but with a hopped up imperial red, a big modified tulip works.