I love my Jersey Beers, there are so few Jersey Brewers that I have to make the time to review their beers, especially when they are getting as much publicity as this Exit Series of Beers (I’m not going to get into the ludicrous politics here).  Exit 11 on the New Jersey Turnpike is where several major New Jersey Highways intersect which give inspiration to this “Hoppy American Wheat” beer, a confluence of Belgian malt, wheat, and American hops.

As expected from a bottle conditioned wheat beer, this pours a cloudy golden color.  It initially has a fairly decent head, which quickly dissipates into a thin foam collar.  But, a good swirl of the beer instantly brings back some of the head.  With an aggressively hopped beer will lack of head retention effect the aroma?

Definitely not your daddy’s wheat beer!  There’s so much Amarillo hops on the nose it smells like a very sweet Apricot Beer, but as soon as the head dissipates that strong aroma dissipated.  Once again, with a good swirl the aroma came back, this time the apricot was not as dominant; it was bouquet of apricot, tangerine, and bubble gum  and oddly enough a very faint tobacco note.  Not sure where the tobacco was coming from, but that is what I smelled… 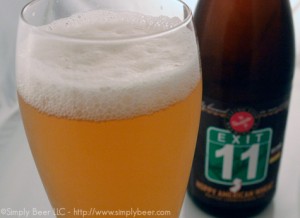 Thankfully no apricot in the taste, it is, without a doubt, a wheat beer.  It is fairly dry and  crisp, with a slight sweetness up front, but ends with a nice spicy hop finish.  This really is what the label describes, a Hoppy American Wheat, with the hops more present in the aroma.

This is a extremely drinkable, 6.2% abv is not going to overwhelm you.  Tons of hops on the aroma very much like the aroma of an American IPA, but the taste of a sweet wheat beer.

Food Pairing: This would go well with a spicy fish, like blackend swordfish.