Smokey, Smokey, Smokey, that is the Schlenkerla Urbock. Probably the smokiest beer I’ve had and also enjoyed.  With several other smoked beers in their line up, I wanted to try the other Schlenkerla beers.  The irony is when I bought this beer, I didn’t realize that there wasn’t smoked malt in the beer.  However it is made in the same kettles as their other smoked beers.

Here is how Schlekerla describe their beer:

It pours a crisp clean looking straw color as you’d expect from this type of lager.  Tons of bubbles in this beer which is helping sustain what little head that was left on the beer after the first 20 seconds.  The initial head was bright white and fairly airy, but quickly subsided to a thin film.

Not the most appealing, but like the appearance, typical for the style.  It was very grainy with a distinctive clover honey aroma.  Surprising to me is how strong that honey aroma was without actually any honey used in the beer. No smoke on the nose… 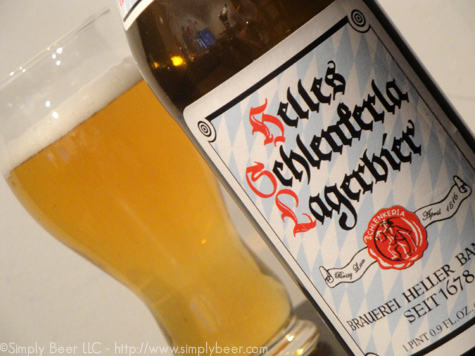 I actually am enjoying this beer quite a bit.  It is a bit on the sweet honey side, but there is a nice subtle hint of smoke to this beer which gave it just a bit more depth.  It has a decent mouthfeel, slightly creamy, although I expected it to be a bit more crisp.  But since I not a BJCP judge, I get to go with what appeals to my palette and not necessarily any guideline.

As I drink more of this beer, the sweetness is starting to grate on me.  Not so enjoyable anymore as it warms up.  Definitely a beer to drink cold.

I enjoyed the subtle smoke in this beer while it was cold.  As it warmed that raw honey sweetness was a bit much for this lighter beer.  Drink this one cold and enjoy that extra layer of dept the smoke adds to this beer.