This beer just landed in my lap, many times with beer trades, the traders will throw in “extras”.  Extras could be anything, but many times they are local craft beers.  In one of my recent beer trades, a bottle of Real Ale Phoenixx Double ESB appeared in my box of Flying Dog Dogschwarz double black lager.  Not knowing anything about the beer except for an unsolicited thumbs up for the brew, I’m excited to try this local Texas beer. 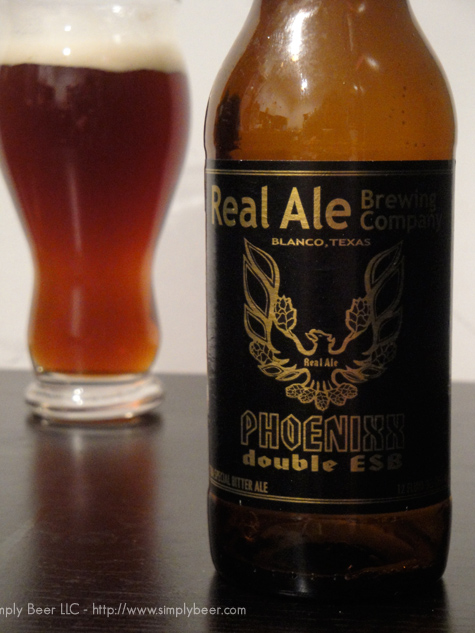 Our winter seasonal is inspired by the great ales of the UK but brewed with a distinctively American attitude. English crystal malt gives Phoenixx its subtle toffee and caramel notes, but this ale is about hops. The blend of English hops, highlighted by its namesake, Phoenix, yields a complex hop character that dominates this special brew.

Nice looking creamy head floating on a deep amber beer.  Some nice red highlights to the beer when held to the light.  Pour initially with a thick head as the head disappeared it left a pretty hefty amount of lacing on the glass. 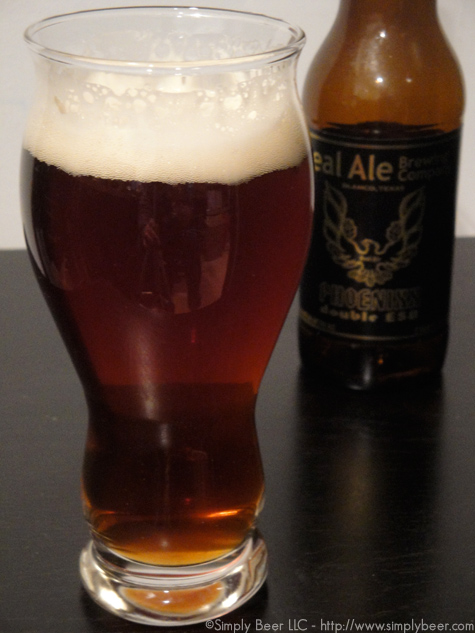 The beer has a very malty, slight toasted biscuit aroma, with a bit of brown sugar sweetness on the nose.  For an ESB, rather Double ESB it has a pretty significant nose for the style.  I rather liked it.

Right off the bat, I’m surprised the malty, sugary sweetness was not present in the taste.  What I got was a very earthy bitter beer.  Had a bit of creaminess that you would expect, but not as much as I would have liked.  Had a nice full mouth-feel without being overly carbonated.  The earthiness to the beer starts right up front where I was expecting the malty flavor, maybe even a biscuity creaminess.  But the bitterness started much sooner then expected and continued throughout the beer, through to the after taste.  I also got flavors of orange peel, bitter apple, and ash.

I was fairly disappointed in this beer, not what I was expecting.  I had their pale ale a couple days ago and it was pretty good, but there were flavors in this beer that just wasn’t working for me.  I’d be happy to make excuses, the shipping or previous storage was the cause of these off flavors, but I just can’t say for sure.  Since this is my only bottle of it, it is all I have to go with.

If you’ve had this, I’d like to know what you thought.