Whats the best Oktoberfest beer on the market, hard to say, everyone has different tastes in beer.  If you ask me or the reviewers on Beer Advocate, The Ramstein Oktoberfest beer is one of the best.  Greg Zaccardi has been being brewing Ramstein Beer out of his High Point Brewing facility since the early 90’s after apprenticing at the Edelweiss Brewery in Germany.  He came back to the United States and opened the first exclusive wheat brewery in Butler NJ. 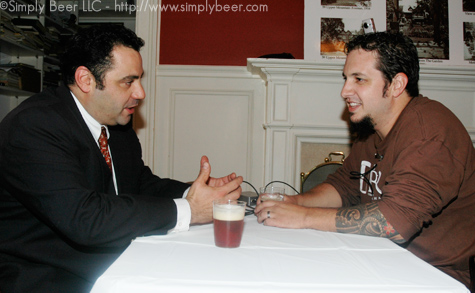 After a brewing exclusively wheat beers for several years with great success, Greg expanded into German style lagers and one of his tastiest beers is the Seasonal Oktoberfest.  His Oktoberfest is only available on draft in NY, NJ, and eastern PA.  If you are lucky enough to find it, try it, with out hesitation one of the best Oktoberfest beers out there.  In early October, I was at an Oktoberfest sponsored by Amanti Vino in Montclair NJ.  This was a small fest party, he poured out his 1/6 of the fest beer in about an hour.  Fortunately for me I was able to share a glass with Greg, take a listen to what he has to say about his beer.