The Flying Fish Hopfish IPA is the second New Jersey beer I’m reviewing for American Craft Beer Week.  Taking American Craft Beer Week one-step further, I’m keeping my beer reviews as local as possible. About a hour drive for me is the Flying Fish brewery, in Cherry Hill New Jersey.  It is unfortunate that in the tiny state of New Jersey (I’m 15 minutes out side of NYC) I have to drive that far to find a local brewery. New Jersey doesn’t make it easy to sustain or start a brewery.  I digress with my rant, Flying Fish makes a pretty good variety of beers and is one of the larger Breweries in New Jersey.  Having previously reviewed their Oktoberfish beer I was expecting an above average beer. 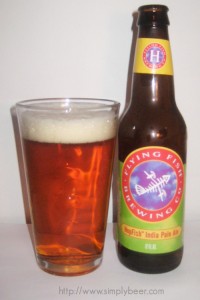 With IPA’s I tend to pour them hard, so that my beer has a big head to open up the aroma, which is what I did with this beer.

Not a strong aroma for an IPA, but what was there was floral and piney and surprisingly somewhat earthy.

Don’t taste any characteristic IPA flavors, especially for an American IPA.  It was a  more malty / grainy then citrusy, more characteristic of an English IPA.  The grain was fairly well balanced with some mild bitterness.  It had the mouthfeel of a rich beer, but the flavors were all muddled and undistinguished.

While there is not much flavor, although I found this beer is very drinkable;  I’m on my 3rd bottle as I’m writing this review.  The saving grace for this beer was the above average aroma and it had an appealing look.

This would go great with blackened fish or chicken, cajun style.