This week we are featuring Imperial India Pale Ale.  These beers are basically IPA’s on steroids (to quote Beer Advocate).  Basically you take the malts and hops of a regular IPA and double or triple them and in many cases, dry hop the beer as well.  These are the beers that “Hop Heads”, like myself, love.  With the increase in hops, comes an increase in malt resulting in an increase in the ABV (alcohol by volume).  Each one of these beers in tonight’s Beer Brawl was at least 8.5% abv. 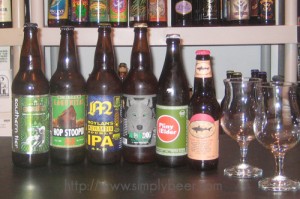 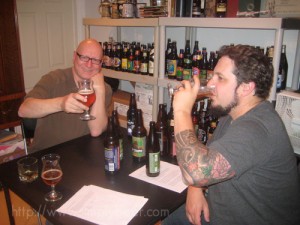 Mark and I started off with the 90 minute, an amazing IIPA with great aroma. At 9% ABV and 90 IBU it was a nice beer to start with.  We continued on with the Moyland’s Double IPA, which was Mark’s favorite.  The Hop Stoopid and Gemini we two of the sweeter beers in the group.  These were followed by the IBU monster Alpha Dog and we capped of the night in great style with Russian River’s, Pliney the Elder.