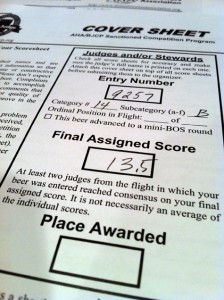 What does one have to do with the other? In my case a lot.  I sent 3 beers to Saratoga NY for the regionals of NHC, a Schwarzbier, Tequila Vanilla Brown Ale, and a Rye IPA.  The Schwarzbier scored a 31 & 29 which I was very happy about. The Tequila Vanilla Brown ale scored a 27 and 29, not great, but respectable in my opinion.  However my Rye IPA which I really liked from the keg scored a 13 and 14.  Ouch!

All the beers I’m brewing now are experiments, unique recipes geared toward understand ingredients and how they interact.  I wasn’t looking for 40pt scores, just some constructive feedback from the judges and for 5 of the 6 score cards, that is what I got.  I have no complaints about the judging of my beers.  With no complaints about the judging and the embarrassing low score on my Rye IPA, what gives?

I’ve had a couple of weeks to think about this and here is my un-scientific conclusion. After I pulled off 6 bottles of the keg, I force carbonated it..  To carbonate the bottles I decided to try the Carb Tabs.  For those of you who don’t know what they are, they are small little pill like tabs of dextrose.  You add 3-5 of them per bottle to carb the bottle. There were two major complaints the judges had about my Rye IPA, a sour flavor and floaties.  The kegged version didn’t have either of these issues.  Now, the floaties were definitely a problem with the tabs.  I saw the same problem in another beer I used them with.  The unintended sourness in my beer is not something I’m used to hearing about with my beer, I’m very confident in my sanitation process.  However, I will concede that it could have been my process. But, the way in which you add the tabs makes me suspect it was also part of my problem.  Since you have to put 4 tabs in the bottle, you end up ovehandling them with your fingers.  (as I’m writing this maybe I should have used tweezers to place them).  It makes me think that the handling of the tabs could have introduced the sanitation issue.

For me, I’m going to stick to priming sugar or dme, I just don’t trust the tabs for my beer.

Do you or have you used the Carb Tabs?  What do you think about them?  Any suggestions on a better way to use them?