This weekend I’m hosting a thank you event for people who have donated to a local school.  This event will feature 7 of my home brewed Beers paired with food.  It was much more of a challenge than I had thought it would be. The beer was the easy part, all my own home brewed ales. Not knowing the palette of my guests, I brewed a wide variety of beer: Grand Cru – fruity and Dry, ESB – light and slightly bitter, Pale Ale – Hoppy, Porter – smokey and sweet, Scottish 80 shilling – rich and smooth, Oatmeal Stout – Chocolaty and bold, and capping the night an old Barley Wine. 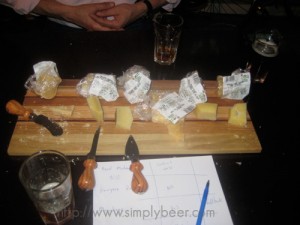 Trying out cheese w/ the beer

The Challenge came in matching foods that would go with the beer and the subsequent food pairing.  For the appetizers I wanted to pair my Grand Cru and ESB with cheese.  For the main course I wanted to focus on BBQ since these beers are getting progressively bigger and I felt that my APA  (American Pale Ale) and my Porter would go well with  Buffalo Chicken Skewers and Pulled Brisket (respectively).  We can’t forget the desert, beer can actually marry pretty well many deserts, I paired the Scottish 80 Shilling with Cheesecake, many people suggest lamb, but I like being different!  The oatmeal stout we’re going straight to chocolate truffles and finally being a huge scotch fan, every good meal needs an after dinner drink.  I will be finishing the pairing off with a 15 month old barley wine; this drink stands on it own and will not be paired with anything!

With this being my first official pair I’m pretty excite, I’ll report back on how the tasting goes. 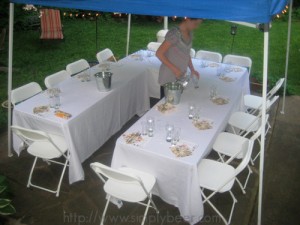 UPDATE: The Day After –

The day after this event I had some time to reflect on the event.  The biggest thing, we were really lucky with the weather, thunderstorms had been predicted all week.  With clear skies and great temperature this evenings tasting was set to be pleasant.  My wife and I spent a lot of time planning this event, me with the beer and Dani with the presentation.  She really made this event look nice with the tasting & comment cards, the plate layout,  and help me immensely with my presentation.

I’m pretty sure that all my guests had a good time, but there are a couple of things that I would do differently next time.

2. For a Beer and Food pairing event, I think it would have been wise, in retrospect, to only have one beer and food at a time, I did two (2 beers, 2 food).  Thought it was interesting to have 2 bit size portions matched with two beers, but I think it became confusing… It was for me pouring, remembering which pitcher had what beer.

3. I should have put the beers on CO2 sooner; my Keg must have had a tiny leak since it was barely carbonated.  Had I realized this the night before, I could have forced carbed the kegged and it would have been much better. 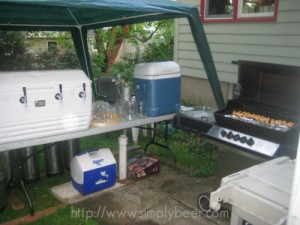 One thing I found out was that really enjoyed doing this event, I loved teaching people about the beer, the brewing process, and having people enjoy my beer.