The Ommegang Rouge is a Flanders red ale. If you have never had a Flanders red ale, find out a bit about the style first because this has a habit of shocking people who don’t know what to expect.  Based on the recommendation of the Owner at the Cloverleaf Tavern, I had to give this beer a try while they had it on tap. 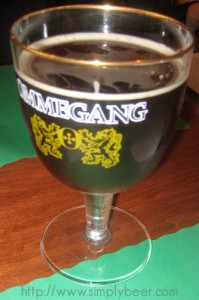 This beer was a deep reddish brown, bit hazy with a tiny little ring of foam.

The aroma was dominated by sour cherries and green apple.

Initially the taste was sour cherries, followed by a bit of sweetness that transitioned back to bitter/green apple.  The mouth feel was almost like cider, it had a good zing. This beer was quite complex and enjoyable.

I would not set out to drink more then one or two of these at a time, but at 5.5$% abv, it isn’t going to knock you over.  I think my palette would be destroyed after a couple of these and I wouldn’t be able to enjoy any other beer.