Leffe Brune is a Belgian Dark Ale, which to me says it doesn’t fit into any other of the Belgian styles. I had this on Draft at the Cloverleaf Tavern the same night as Ommegang Rouge. 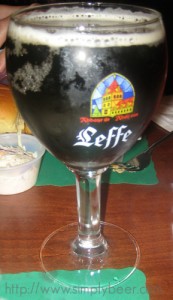 Beer was a chocolate brown with a nice creamy head. Great lacing.

Strong yeasty aroma with a hint of cloves and raspberry esters.

This beer was highly carbonated, malty with notes of banana, molasses, and blackberry.

Not sure what it was about this beer but there was a flavor that just didn’t sit with me, and I think it was the banana flavor that I was not expecting.  I don’t think I would order this beer again.