On June 23rd my wife and I had the pleasure of attending a Beer & Dinner pairing featuring some off centered Dogfish Head Beer and the cuisine of Chef Michael Carrino of Passionné and first season winner of the food network’s Chopped series.  The event was put together by Travis Glohs of Amanti Vino, Chef Carrino, and Wendy Domurat of Dogfish Head Brewery.  If you have listened to the Simply Beer podcasts or have read my reviews, I have a great respect for the Dogfish Head beers and especially their brewing process.  With the depth of their beer portfolio, I could only image which beers could be on this tasting.  Introducing the lineup for the dinner, Travis brought the whole Dogfish head line to Chef Carrino to sample and he came up with a complementary menu not only to the beer, but the image of Dogfish head, who’s motto is “Off centered ales for off centered people”.

Our first course featured one of Dogfish Head’s signature beers, the 60 minute IPA.  The 60 minute IPA is continuously hopped for 60 minutes giving it an amazing balance of hops and malt.  This beer was pair with an Amuse Bouche (single bite appetizer) which was a small cracker and smoked salmon with horseradish foam(?).   It was absolutely delicious, my only problem, I could have eaten 10 more.  I am a very adventurous beer drinker.  I will pretty much try anything that is called beer, but when it comes to food; I tend to stick to what I like and have had before.   Events like this help me try new foods that I would normally skip over such as our next course.

The second course featured Dogfish Head’s Midas Touch.  It is an ancient Turkish recipe using the original ingredients from the 2700 year old drinking vessels discovered in the tomb of King Midas.  The beer was golden in color, very clear and lots of carbonation bubbles.  The beer smelled of grapes, honeydew melon and honey.  It was crisp and fruity with a slight alcohol finish.  It reminded me of mead or braggot.  Paired with this beer was a Honeyed goat cheese tart, pickled beets, herbs and a dried tomato.  I hate tomato unless it is in BBQ sauce or salsa.  I never would have ordered this dish, but since it was the pairing, I’m glad it got to try it.  I enjoyed the tart, the goat cheese really went well with the beer, but the pickled beets and tomato dominated the pairing a bit.

Thinking back over this event, this was probably my favorite pairing, the Dogfish Head Raison D’Etre paired with the Duck Mole.  The Raison D’Etre is a red mahogany colored beer with a thick airy head.  It has a sweet aroma of raisins and candy.  The beer is slightly tart which is balanced really well with the malty, bready characteristics of the beer.  The Raison D’Etre was paired with a Duck Mole.  Mole is Mexican sauce, they are a wide variety of ingredients that can be used to make a mole sauce, Chef Carrino’s sauce was based with raisins.  The beer, duck, and sauce were all so artfully crafted and worked so well together, I wanted another plate and more beer! 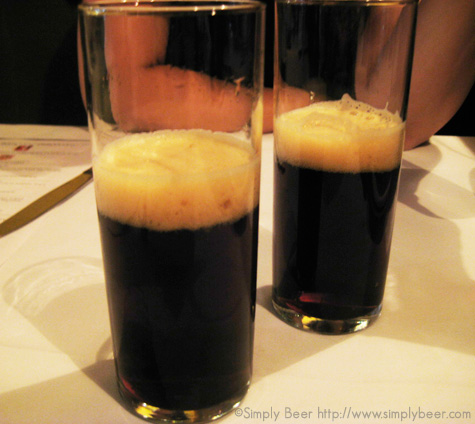 The Dogfish Head Indian Brown Ale was the beer for second main course.  This beer had a strong chocolate and ginger smell that dominated the aroma, but also lots of background hops.  There was a nice thick dense head sitting on a dark brown beer with ruby highlights.  The beer warms to a coffee flavor mixed with malty, chocolate, and hop bitter flavors.  This was paired up with a Moroccan BBQ King Salmon with glazed dried fruit and tarragon.  I thought the contrasting flavors in the beer and the BBQ sauce on the salmon work really well together.  The salmon was perfectly cooked and the BBQ sauce was excellent!  I also need to stop here and personally thank Chef Carrino.  My wife has seafood allergies, and the Chef created this amazing Artichoke, mushroom, limabean  dish which sat on couscous. My wife loved it and he also brought her out a spoon of the BBQ sauce so she could taste the it with the beer as he intended.   My wife and I didn’t ask for anything, only not to be served the fish and he went out of his way to make her a plate; a very classy and thoughtful act during what I imagine was a pretty hectic night. 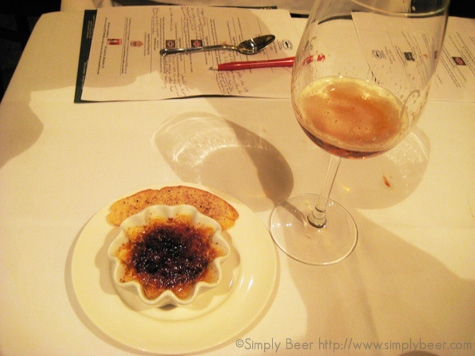 The final dish of the evening was the Dogfish head 120 Minute Imperial IPA paired a Froie Gras Crème Brulee, yes you read that right Froie Gras.  I don’t particularly like Froie Gras, but I’m a huge fan of Crème Brulee and especially the 120 minute IPA.  I think this is my 3rd tasting with 120 minute IPA in the last 2 months.  It is an extreme beer that has many qualities of a fine port.  At 18-20% ABV, it is a sipping beer that should be enjoyed slowly because of all the flavors and complexities it has.

This was the second event I’ve been to sponsored by Amanti Vino and again they did an excellent job,  pulled all the pieces together for a very smooth event.  I’m looking forward to the next event, unfortunately for me,  I was too late to register for the Brooklyn Brewery tasting in July, but I’m going to keep my eyes open for future events.