On June 28th my buddy Rich and I went to our second beer tasting sponsored by the Draught Board 15 at the Gaslight Brewery in South Orange NJ.  The first tasting was with Brooklyn Brewery, a great event, lots of good beer (Local 1&2, Brooklyn-Schneider, Dark Matter, and Black Ops), knowledgeable rep, and lots of swag.  Rich and I thought we were going to be in for another great event, especially since I also have enjoyed many good  Stone beers lately, Cali-Belgie and the Double Bastard Ale. 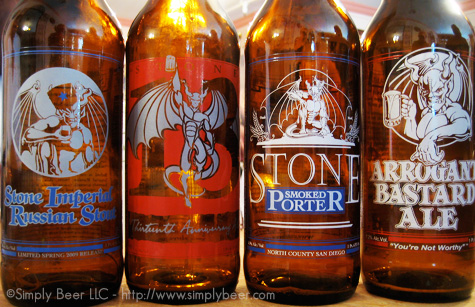 This tasting did not get off to a good start, the Stone rep was over an hour late to the tasting.  He said he was stuck in traffic, which he probably was, but this is Jersey.  There is ALWAYS traffic, you should plan on it.  If that wasn’t bad enough there were no glasses for the tasting, we had these 3 ounce cups which were angled so you couldn’t swirl the beer.  But, we’re there to try some good beer, right!

The first of five beers was the Stone Levitation, their basic session beer,  low ABV and should be a nice easy drinking beer.  Because of the glasses we were using, it tasted like plastic.  There must have been some residue in the cup, because this beer tasted like chemicals.  Nice way to form an impression on potential customers.  I will forever associate this beer with plastic, yuck!

The Smoked Porter was next for us, more of the same.  A smoked plastic beer that was server to us way to cold.  0 for 2 Stone.  At this point, most of the people at the tasting we grumbling about  the “effort” put into this.  Had this been my first tasting with the folks from the Draught Board 15, I would have laughed my way out and never given them a second thought.  Luckily, I had been to others and knew this was not the way the Draught Board operated.

Note: the Smoked Porter was used in Beer Brawl 17 – Porter, I gave it a 92.  A good beer when served at the right temperature in a good glass. 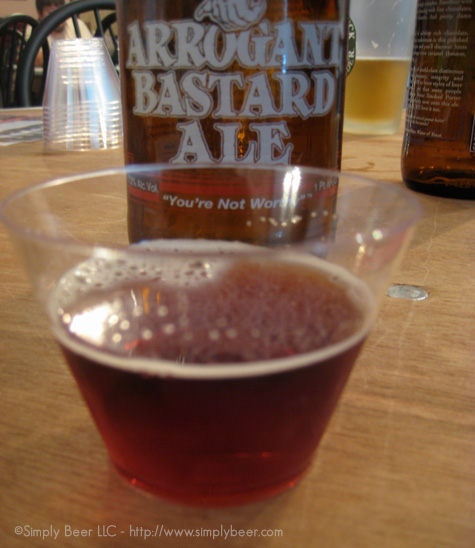 The Arrogant Bastard Ale was the next up, using the same cup, hoping the plastic taste will go away.  Having had the Arrogant Bastard on Tap before, I have enjoyed this beer, but once again it was another plastic beer.  I’m sounding like a broken record, but how can you expect to gain customers with such an amateur display?  The people at this tasting are more of the “connoisseur” types then the drink whatever is cheapest at the Piggly Wiggly.  I would imagine these are the type of people Stone would to impress and be spokespeople for their brand. 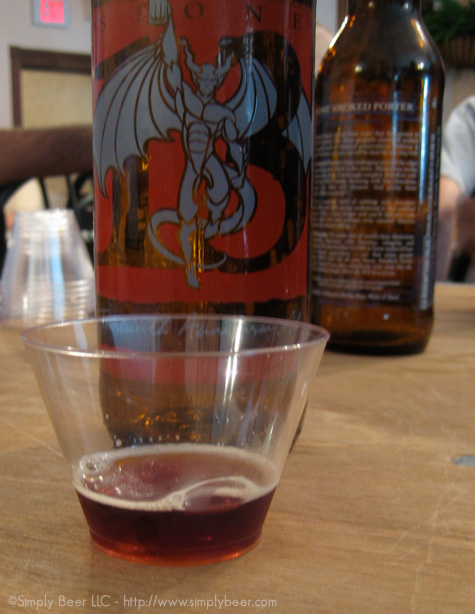 I was excited, even with all the glassware issues, to try this next beer, the Stone 13th Anniversary Ale.  Every year Stone creates a limited Anniversary ale, this year was an Imperial Red Ale.  The Rep only had 22oz bottle for 22 people, nice…  You can see from the picture how much we all got, it wasn’t enough to get a sense of the beer.  To Bad, the one sip I had tasted pretty good.  It was very hoppy!

The final beer was a completely unmemorable Russian Imperial Stout.  Beer was served way to cold and we didn’t have much to get a sense of this beer either.  A continuing theme this tasting.

Overall, I enjoyed the people there (Twitter:@geservo  & @richdigi), but as I’ve said a hundred times this review, Stone didn’t seem to care about our tasting.  It’s too bad, I’ve lost some respect for this company.