New Glarus Brewing Co has a reputation of making good Belgian style beers.  However if you don’t live within driving distance of Wisconsin, they are pretty elusive beers to get since they do not ship or distribute outside of their home state. But lucky for me I was able to trade some beer with a guy in Wisconsin (thanks Mr. Johnson!) and I’ll get to drink my way through most of this years brews, starting with Stone Soup.  Stone Soup is “classified” as a Belgian Pale Ale by some, but New Glarus calls it an Abby Ale.

New Glarus describes this beer as:

a sophisticated Abbey style ale. Both elegant and drinkable this ale is cleanly aromatic with spicy notes of clove and ginger. Crisp and fragrant up front while gracefully sliding into warm malt notes at the finish.
Fermented naturally in this bottle, the beer in your hand is a living testament to the value of many working together to create something bigger than the individual parts. Moving a mountain begins with a single stone. 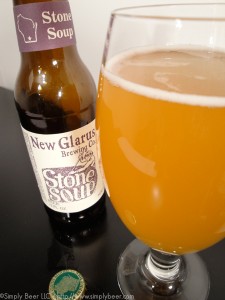 Very hazy blond beer.  Looks fairly carbonated with lots of bubbles coming up, but very little head or head retention.  Only a slight collar of white foam with this one.

A bold aroma with a lot going on! A very yeasty bready beer that has a slight orange citrus aroma dominates your nose at first.  Then there is also some underlying spice and apricot fruit notes as well that builds the complexity.

A dry beer, has a fruity flavor, big carbonation.  A decent amount of bittering hops with a tongue tingling peppery finish.  With the strong yeasty esters and big effervescent carbonation it reminds me of a Belgian Pale ale feel.   The more I drink, the more flavors are coming out. As the beer warms, the generic “fruity” flavor is more apricot and banana with a bit of spice.  The label says Ginger and Cloves, but for me the two are combining together into a more generic spice then one dominating over the other.

Good flavor, but really lacked on the head from this bottle.  Maybe it is better on draft or another bottle? My glass was clean, so may I just need to have another!