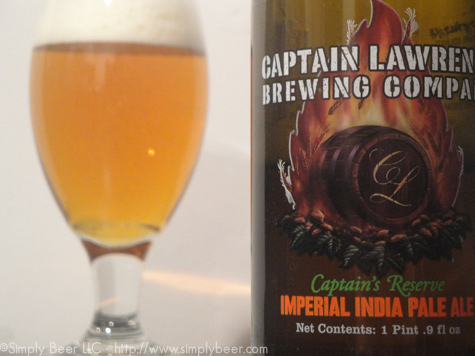 Captain Lawrence describes this beer as:

This beer is a salute to the ingenuity and creativity of the American craft brewers. A uniquely American style of beer, the Double or Imperial IPA, has become the calling card of many craft brewers who aren’t afraid to push the limits of what hops can add to a beer. This beer is big and hoppy – not for the faint of heart! Be prepared to experience sensory overload as you savor this Imperial IPA.

Hops, and lots of them. The aroma is bursting with the classic citrus and pine aroma of American-grown hops. The flavor is dominated by a hoppy bitterness, with just enough malt to make you want to take another sip. 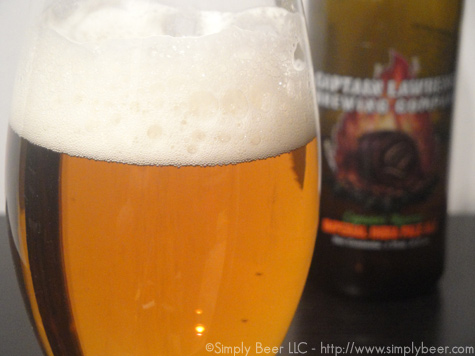 Lets see how the beer holds up to this great description.

A beautiful amber color with a nice pillowy creamy head.  Awesome head retention with a good deal of lacing.  It also looked fairly well carbonated with a good column of bubbles raising up the middle of the glass. 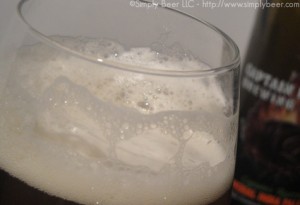 Head on the Capt. Lawrence IIPA

Great Aroma! It has that good piney aroma that I love.  Also mixed in with the piney aroma were mango, bubble gum, and just enough caramel malt mixed in to give me the impression it may also be a fairly creamy tasting beer.  This was another IPA that I could just sit and smell for minutes on end, building up that anticipation to have the first sip!

Damn, but that does not disappoint.  Sometimes great smelling beers can let you down in the flavor and other less impressive aromatic beers can really impress on the flavor.  This one hits on both! Nice creamy, sweet, caramel malty, full mouth feel right up front that transitions into a pretty intense citrus grapefruit flavor with a good lasting bitterness.  There is a little bit of alcohol on the finish, but it was a nice asset to the beer.

As you can tell from my descriptions I love this beer.  Whats even better the price, $3.95 at the Liquor Outlet in Boonton NJ.  This is a phenomenal IIPA, world class!  While I think out of the cask was a bit hoppy’er, this beer is worth way more then the cost.   One of the best IPA’s I’ve had in a while.  I’m gonna have to make a trip up to the brewery, see what other secrets they are keeping up there in Pleasantville NY.