This has been a long awaited beer for me.  Flying Dog is one of my favorite breweries, yet NJ always seems to be at the bottom of the list.  I get it, I understand why, New Jersey is not considered a craft beer state.  I’m working on it, converting people one beer at a time. But I digress, it’s finally in NJ and I have one to drink tonight, which makes me a happy man!  Raging Bitch is Flying Dog’s Belgian Style IPA, brewed as their 20th anniversary beer. 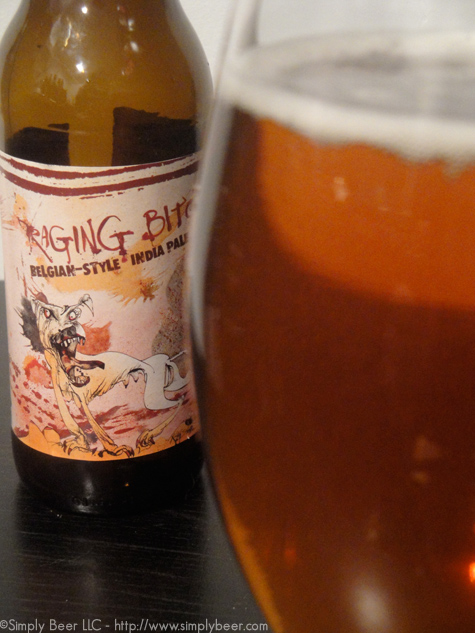 I love the way they describe this beer:

Bitches come in a variety of forms, but there’s never been something as sassy as Flying Dog’s Raging Bitch Belgian IPA. An American IPA augmented with Belgian yeast, our 20th anniversary beer jumps out of the glass and nips at your taste buds with its delicate hop bitterness. At 8.3% ABV, this bitch is dangerously drinkable.

“Two inflammatory words… one wild drink.  Nectar imprisoned in a bottle.  Let it out.  It is cruel to keep a wild animal locked up.  Uncap it. Release it… stand back!!  Wallow in its golden glow in a glass beneath a white foaming head. Remember, enjoying a RAGING BITCH, unleashed, untamed, unbridled – and in heat – is pure GONZO!!  It has taken 20 years to get from there to here.  Enjoy!”

A pretty clear amber ale, lots of little bubbles.  Not much in the way of head on this beer, a thin collar was what remained of a quickly dissipated head.

Oh boy! The aroma doesn’t quit on this beer.  Tons of apricot and mango on the nose, smells like it was dryhopped with a combination of Amarillo and Columbus hops.  There was also a bit of pine and a hint of yeast on the nose.  I could just smell this beer for hours.

A very bold beer,  well suited to its name!  Some initial up front caramel, met by a zing of orange zest with lots of effervescence.  Once that initial effervescence is gone, the is a short creaminess that slides into a great rolling piney bitterness with a hint of an underlying peppery spice and alcohol.  But, for an 8.3% abv beer the alcohol is very well concealed.

I only had one bottle of this beer, a gift from a friend.  Looking forward to a six pack of this She Dog!  I don’t think this is going to be around very long, and the aroma makes this beer exceptional, so don’t sit on it!