After a quick 50 mile trip up to the Captain Lawrence Brewery in Pleasantville NY, with a the threat of an apocalyptic snow storm looming; I was able to snag a couple of the last remaining Golden Delicious 750ml Bottles.  Now, to have my first taste of the Captain Lawrence Golden Delicious.  This beer is labeled an American Style Tripel that has been dry-hopped with Amarillo hops and aged in Apple Brandy Barrels. 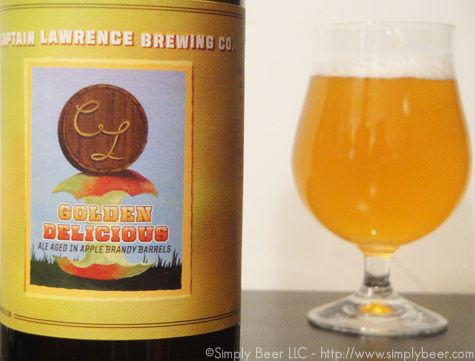 But first, here is how Captain Lawrence Describes the beer:

There’s nothing quite likes Mom’s apple pie…But I am willing to bet this beer is pretty darn close.  An American Tripel, dry-hoped with Amarillo hops and aged in Apple Brandy barrels from one of this country’s oldest distilleries.  The tropical aroma of the hops and the delicate apple aroma from the barrels are a perfect match.  Straight from the Captain’s cellar to yours, we hope you enjoy.

ABV: Not list on bottle or website, but a response from Captain Lawrence’s twitter feed: “@SimplyBeer well it starts at 10% before it goes into the barrel, so a little above that”

Beer pour a very hazy orange straw color, unfortunately I had to give the beer a fairly hard pour to get any kind of head on the beer.  Not sure if my bottle was just under carbonated or is a result of High abv and/or the aging process.  Surprisingly, the little collar of foam did leave a relatively substantial amount of lacing. 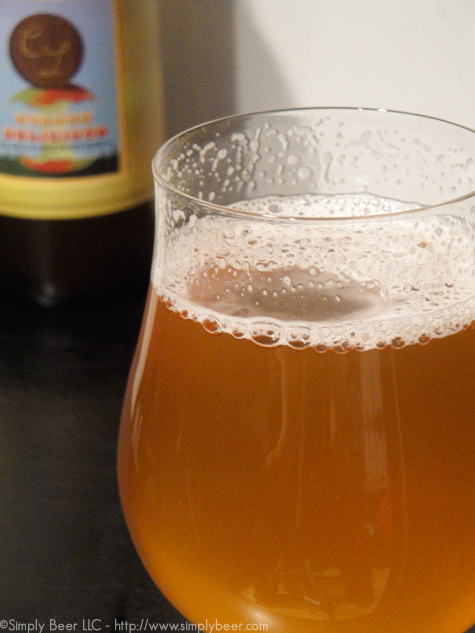 While not a powerful aroma as you might expect from dry-hopping with Amarillo hops, the aroma was very appealing and complex .  Tart apples on oak hits you right away as the dominate aroma, followed by mango infused alcohol and hints of apricot.

A very intriguing beer.  It initial tastes like a tripel, sweet and bit boozy, until you are hit with the Apple, Brandy and some bitterness towards the end.  The apple brandy really rounds out this beer nicely.  It takes that sweetness most tripel have all the way through and cuts it off nicely, leaving your mouth refreshed and ready for another sip.  With the big tart apple on the nose, I really didn’t get much tartness in the beer, which is probably a good thing thing.  I’m not sure how well the sweetness from the base Tripel would work with a tart/sour apple flavor.

Very pleased with this beer, well worth the trip up to the brewery.  Which by the way, has some great beer on tap that they really should be bottling, in my humble opinion.  The espresso stout was awesome.  I digress, Back to the Golden Delicious; a unique take on a Tripel well worth seeking out.  I’m excited to cellar a bottle for a year and try it again.