What Happens to a Beer Geek on the Wagon?

As I’m writing this, 29 days on the wagon. Quite frankly it has been much easier then I thought it would be. A couple days were wrought with temptation, Captain Lawrence Smoke from the Oak release, trip to my brother-in-laws in Philly, and a couple of birthday parties.   Although some of these days required will power, like I said it wasn’t as hard as I thought. I’ve still been brewing beer, organizing some upcoming beer events, and my newest project, IRON BREWER. But, it still has left me with some free time late at night when I would have been writing beer reviews, so what is a beer geek to do?

Well, this geek started to reorganize his beer cellar. It started off rather innocently and turned into a major undertaking including a drill and excel spreadsheet; I get carried away some times. It started out on Sunday afternoon, there was a wine rack that my wife and I had won at a charity Tricky Tray and I was going to use it to replace the two wine racks we had previously. As I got ride of the old racks and measured out for the new one, it was just to big and I really don’t drink as much wine as I used too.  It was time for it to go, freecycle and away it goes!  We used to have 70 or 80 bottles of wine; but as I became more obsessed with craft beer the pendulum swung the right way to the point where we only had 8 bottles of wine.  WTF, why the hell do I even need a wine rack!!!  And with that I went into overdrive!

I replaced the space where the wine racks had once lived with the Kegorator!  Booyah!  Fits perfectly, now my office isn’t so cramped.  It also allowed me to put my co2 tanks and regulators behind the wall.  This is where the drill comes in, I bored a nice big hole through the wall to run my gas line.  I ain’t no Holmes on Homes, but I got the job done.

Once I got my Kegorator where I wanted it, I had to move all the beer that was randomly stored on it, on my desk, and on my floor put away.  I have beer that I’m aging, beer that I’m reviewing, and beer that I’m drinking, but it was all over the place and I couldn’t keep track of it all.  I’ve tried to keep a list of what I had in my cellar on my website, but it was always slightly out of sync because I would forget that I drank something or I couldn’t find it in all the boxes I had.  So what did I do, I created an excel spreadsheet with all my beer, what box it was in and how many I had, Proud to say I have over 170 different beers in my cave.  It took about 3 days to get it sorted and boxed, but I did end up with a clear idea of what I had in my cellar and more importantly, where it is!  Now I just need to start drinking it once I’m off the wagon… 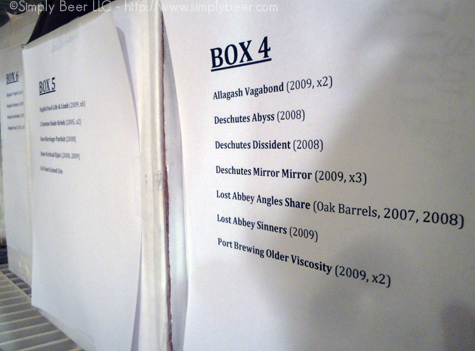 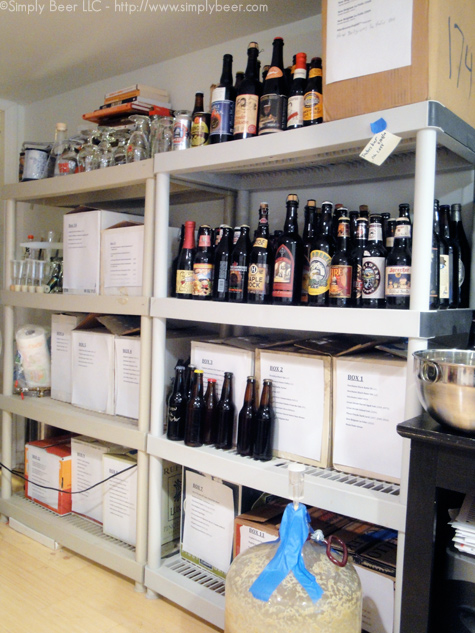 Ok, so I totally geeked out by creating a place for beer I’m trading, beer I’m drinking/reviewing/aging, and even for my glassware.  My dungeon is now neat and clean, with things in their place.  Now I can start the process of deorganizing it in preparation for my next organization!