Saturday was the 2nd Brooklyn Wort Homebrew competition.  I was very excited to go, hang out with a couple of friends, while myself and 29 homebrewers shared their beer with over 250 people.  It set out to be a great day, my trek from New Jersey to Brooklyn was quick and uneventful and got all set up with my jockey box and keg; I was ready to start pouring my beer for all those who had paid the $30 to get in the door. 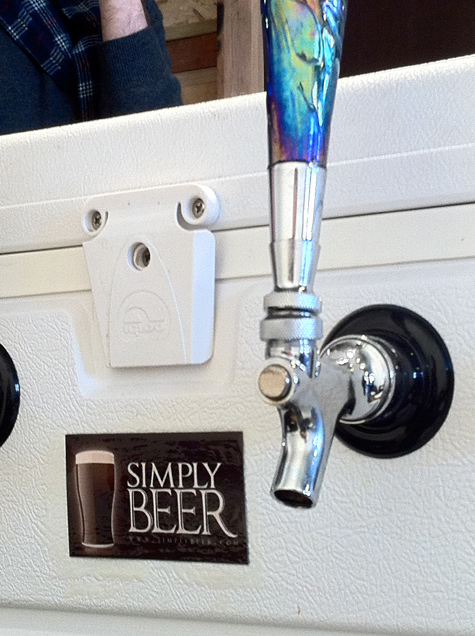 Going into this competition, I knew I was up against some steep competition with four of my friends pouring their homebrews, John Kleinchester, Chris Lehault, Andrew Maiorana, and Jonathan Moxey.  As I poured my first beer, I knew things were not going to go as well as I hoped.  My first problem, my beer was under-carbonated, the beer was pouring with out any head.  It’s especially hard to recover from that lack of carbonation on a 2 ounce pour.  Secondly, my aluminum chill plate was working too well, my beer was pouring super cold.  Not what I wanted for this beer, actually not what I want for any of my beers. Today I was pouring my American Black Lager. The extreme cold of the beer hid the hops and really brought the bitterness of the beer forward.  After tasting my friends brews, I knew there was no way I could possibly show well against their beers.

AS the event progressed, I was getting great feedback from people.  Most seemed to like my American Black Lager, but it seemed as though I had to explain the beer to everyone.  “It’s a hybrid between an IPA and German Schwartzbier”  with that explanation they seemed to get the concept and enjoy the beer.  My third mistake of the night was not having an adequate style description on the sheet everyone got to try the beers.  (actually my first mistake since we had to email a beer name and style ahead of time).  The is no style called American Black Lager, so I sent in more of a description since I didn’t think these beers were being judged to a style. That was my fourth mistake.  At every competition, judges lean toward some sort of style, it what is most natural to judge against.  I should have simply left it as American Black Lager and I think it might have been better received by the judges? 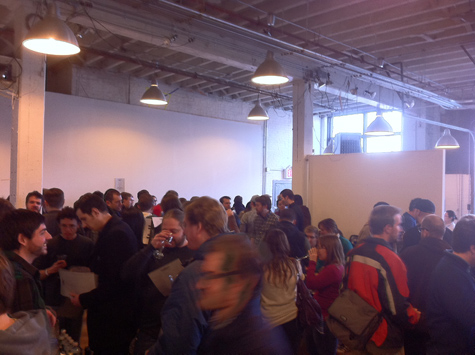 What do I mean by better received, well I’m not sure, for the most part I think they hated my beer.  To be honest I was pretty upset when I got the comment cards back from event coordinators.  They were pretty brutal.  My scores were embarrassing low.  While I’m still embarrassed by the scores, I’m going to tell you what they were since I feel as though this experience is going to make me a better brewer and I’ll come back stronger next time.  From low to high: 9/50, 12/50, 14/50, 20/50, 23/50, 24/50, 25/50.  If you’re reading this and have had you beer scored, a score like this can be pretty shocking to your system.  While I acknowledge my beer had some flaws, these were eye opening scores.  Now I don’t know who gave me what score, nor do I care or hold any ill will.  Several of the comment cards were helpful, giving me the positives of the beer and also where the beer fell apart.

I was hesitant to write about this, but this made me realize, since I’ve been homebrewing for so long, I think I started to get over confident, maybe even cocky about my abilities, lesson five.  After letting this sink in for a day I have a renewed passion and desire to improve on my basic techniques.  Maybe it is time to go back to basics and reset.  Do some more reading and studying, while keeping these comments in the back of my mind as additional motivation. 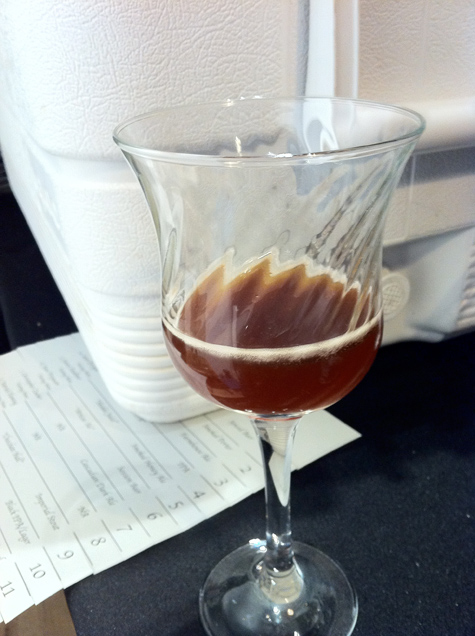 A glass of Brooklyn Brewery's Reinschweinsgebot

Even though my beer was not well received by the judges, I did get some great feedback from a whole lot of people tasting it on saturday with a bunch coming back for seconds.  That is what made this day worth it for me, there were some people who really liked it, which is a win for me.  I also got to have a glass of Brooklyn Brewery’s Wild One and Brooklyn Brewery’s Reinschweinsgebot, Win and Win!

While it wasn’t my best showing, two of my friends did do well, Andrew Maiorana received the peoples choice award for his Black Pepper Brown Ale and Chris Lehault received Brewer’s second place with his Hibiscus Ale.  Congratulations guys and look out for me in August at the next Brooklyn Wort!