NJ State Fair homebrew competitions is one of my favorites, probably because I won best in show in 2010, but it’s also my home state largest competition and I like to “brew” local.  Unfortunately this year I didn’t win or place in any of the categories I entered.  However, I thought I would share the results of my entries with you and they are not all pretty.

Let’s start with the good and work our way up the really bad.

This rocked out with a 33 (35 & 30) and was awarded an Honorable Mention. The judge who gave it a 30 thought it was a “very good beer, roast was a bit high causing some astringency and bitterness. Otherwise this is delicious”.   I basically got dinged in the Aroma, judge thought it was flat and papery.  The other judge gave it a 35 with basically the overall impress, but liked the aroma unlike the first judge.

My thoughts: I think these judges we pretty much spot on with their reviews based on style guidelines, which is what these competitions are about.  I personally didn’t feel this beer was as astringent as they described, but based on the scores it must not have been that bad. 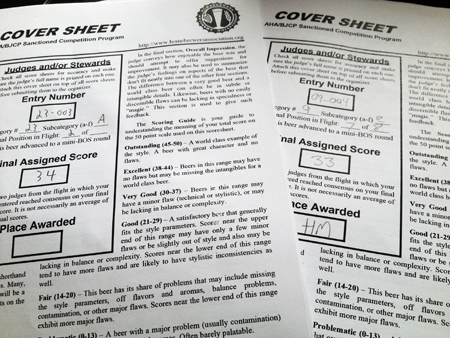 This too rocked in the Judges view with a 34 (36 & 32), pretty good but didn’t score high enough to place in this tough category.  I put this in the specialty category since it didn’t fit into any of the sour categories.  The first judge, who scored it a 36, described it as “Very nice combination.  Well executed – could have a little more malt complexity even for a brown porter – Enjoyable beer thanks for sharing”.  She loved the aroma and mouthfeel, but dinged me a bit on flavor for the malt character.  The other judge scored it a 32 and described it “The brett character is lovely but somewhat powerful for the subtle base style.  Could use more roastiness to stand up to the base. Quite a unique experiment!” Like the other judge I got dinged on the roast, but I also was marked down for mouthfeel as low carbonation and a bit watery.

My thoughts: While I love this beer, I was surprised at the high scores. It’s a tough style with a tough yeast, 100% Brett Trois yeast.  My thoughts on the beer were more in line with the lower score; I also thought it was a bit thin from the yeast activity.  A problem I consistently have when I bottle from the keg, I always loose way to much carbonation, ending up with flat beer.

This beer fell short of what I was hoping for and it showed in the judge’s scores.  This wit scored a 27 (25, 28,28,28) not sure why there were 4 judges, only 2 of them left any feedback that was remotely useful. The first judge, who scored it a 25, said “Very clean beer, too bitter to style.  Hard beer to enter into a specific category, cut back on hops or bitter orange peel.”   The second judge said, “Solid summer beer but misses the mark for a wit due to clarity and bitterness level. I’d be glad to drink a pint though”

My thoughts: This beer was a couple months old when I entered it.  It started as a cardamom wit, but the cardamom had completely fallen out of the beer and left a fairly unbalance wit, although it was a fabulously easy drinking beer.  I’d have to agree that my scores were very reasonable when judging against the style.

Wow ‘o wow the judges did not like this beer!  Here are my pathetic almost embarrassing scores, 17.5 (17 & 18) OUCH!  Here is what the 1st Judges who scored it a 17 said, “For an American IPA – I’m not sure this fits the bill.  Would have expected more of a balanced hop forward ale – but this beer is more of a fruity malty Belgian style ale”. The second judge wrote “Nice presentation but beer is out of style. Lower crystal/caramel malts increase hop additions, raise mash temp and raise carbonation”.  I’m not even going to get into the dinks on this beer since obviously there were a lot.  Hops, malt, and carbonation were all appeared to be a problem.

My thoughts: Frankly, I’m shocked this was my beer.  I knew there might be a minor carbonation issues when I tried the extra bottle I had on the day of judging and it was nowhere near these comments.  In fact, a professional brewer had some really nice things to say about this IPA a couple weeks before AHA which is why I entered it.  I can only imaging what I did to mess up this beer so badly from the keg to the bottle.  C’est la vie