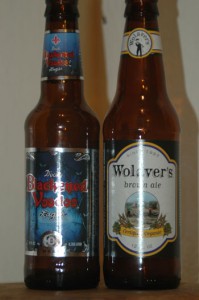 So last night I had New Orleans own Blackened Voodoo Lager for the first time in a while.  It was quite tasty.  It is a dark lager that was more complex than what I remembered or expected.  Pretty cool to think about how much history is behind this brewery and that it was nearly destroyed by Hurricane Katrina.  I savored the brew and to tell you the truth…will have to add a sequel to this cause I wasn’t thinking about the characteristics at the time.  I can recall malty flavors and a reddish brown color….

Which brings me to the reason this post is titled the Two for One.

The brew I tasted this evening was an Organic Brown Ale from Wolavers out of Vermont.  From first pour it had a reddish brown color…similar to the Dixie Lager above.  It had nice carbonation a very light head and sweet nutty aroma.  You could taste the malty caramel and chocolate overtones but yet was very light and almost watery…not sure if that is such a good thing or a good descriptor…but it has a certain drinkability.  Would make a good refresher for those Indian summer afternoons….in November.  Hey last weekend we were pushing 80 here in the Bay area.

To conclude, I enjoyed both as they were a nice complement to a hard days work.