Brown Ale’s are this weeks feature, we initially tried to do American Brown Ales, but most beer labels don’t indicate if the beer is an English or American.  Out of the 6 beer we ended up with 3 were English and 3 were American.  You may think well, whats the difference they are both brown ales, but English tend to be malty and often nutty where the American beers tend to be a bit more dry and bitter with more notice citrus notes. 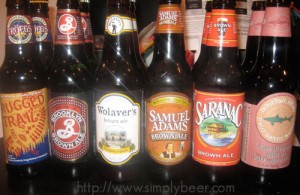 Joining me this week, as usual, was Mark Jackson, Will Hogan, and Corey Greenberg on the Audio.  The only prerequisite I have for these Beer Brawls is a love of beer.  You don’t need to know anything about the beers we are drinking only a willingness to try them and voice an opinion.

For this Brawl, we decided to start with the English Browns, The Sam Adams, Troegs Nutt Brown, and the Wolaver’s and move on the Americans.  Since the English ones tend to be slightly lighter and not as bitter, we didn’t want to destroy our pallet.  Even with the differences in the individual beers the massive 12%abv Dogfish Head Palo Santo Marron was the clear cut champion this week.

Download or listen to podcast to here the whole discussion, the dissapointing beers to the amazing.

Up next time, Czech Pilsner.  If there is a style of beer you think we should put up to the test in our Beer Brawls, drop us an email or leave a comment.